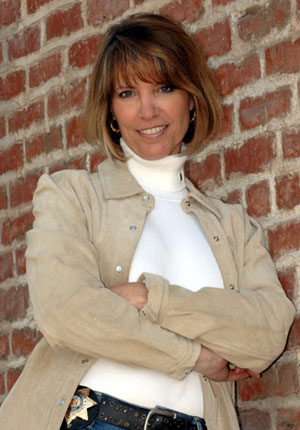 After an ordinary Santa Clara Rotary luncheon, a club member is killed in a fatal hit-and-run accident. Fortunately witnesses get a glimpse of the driver’s face. FBI special agent and forensic artist Sydney Fitzpatrick is called in to create a composite sketch.

The hunt for the killer leads Fitzpatrick and her partner, covert agent Zachary Griffin, on a chase that covers the country – while uncovering the Rotarian’s secret life as an agent for a criminal conspiracy that reaches into the highest levels of international power.

Well, not really. But that could easily be the plot of a future thriller (The Last Lunch?) by award-winning author Robin Burcell, who was the guest speaker at the Santa Clara Rotary’s Feb. 6 lunch meeting.

A retired Lodi, Calif. police officer and forensic artist herself, Burcell has published 10 novels that combine the classic police procedural mystery with the intricate conspiracy plotting of a Dan Brown thriller.

Burcell’s own story is as entertaining as her books. During her time in law enforcement she worked as a beat officer, hostage negotiator, detective, as well as undercover. As a forensic artist – her life-long interest in art led her to the FBI academy for training – she has created composite sketches of criminals, as well as creating drawings from decayed-beyond-recognition corpses to enable identification.

In her entertaining half hour talk, Burcell shared stories about her experiences as the first woman on the Lodi police force, the challenges of trying to write while holding a full-time job and raising children – “I stopped watching TV…and my husband took over the housework” – as well as how real cases inspire her plots.

“I never expected to be a police officer,” she said. “I wanted to be an Olympic ice skater. I took a second job as a bookkeeper to pay for ice-skating. The mother of one of the kids at the ice rink’s husband was a Sheriff’s Deputy. She said, ‘you should be a police officer.’ I applied just to shut her up.”

Burcell applied, and after being the only woman applicant able to pass the Lodi police physical agility test, she was accepted on the force. Her skills as a negotiator became clear when, as a woman with less physical strength, she realized that she needed to talk her way out of situations where a man might simply respond with force.

She started writing mysteries after taking a workshop in the business of romance writing. Her first mystery – Every Move She Makes, featuring homicide investigator Kate Gillespie – was published in 1999. While each of her books can be read on its own, there are threads connecting the books, and keep readers engaged with the characters. She’s had a book optioned by Hollywood, but she’s not holding her breath. “Book options usually fizzle,” she notes.

At the end of the day, it’s her readers’ experience that Burcell cares most about. “I want someone to pick up my book and feel it’s a real picture of police work.”