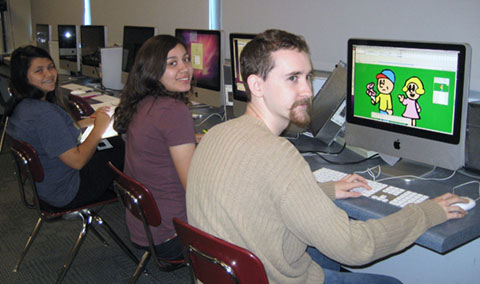 In a one-minute animated public service announcement created by Santa Clara High School animation students April and Romeo, a teenage girl walks into a bathroom and attempts suicide by taking a handful of colorful pills. The screen then flashes to a list of facts about teen suicides. The animation ends with prevention information, including a suicide hotline phone number.

Animation project teammates Alysha, Briana, and Justin P. finish up their final project during class one morning. It’s an under-two-minute creative story with the working title “Unfair.” In their story, a boy and girl visit a carnival where the girl sees a prize that she wants. The boy tries to win it for his girlfriend by playing games such as ring toss, but he doesn’t succeed. Unfair, indeed.

In “Courage,” teammates Camille, Carmen, and Karine tell the story of a little star named Leo who learns how to be brave. Junior and Saathvik animate their story of a boy astronaut trying to make a rocket for a moon landing. Bobby, Evan, Justin D., and Petey’s adventure story is “Dinosaurs in Space.”

“It’s nice that we have an animation class that teaches us the principles and basics of animation and provides us with expensive tools we wouldn’t have at home,” says senior Justin P., who has always liked to draw and will study animation at Cogswell Polytechnical College in Sunnyvale in the fall. SCHS’s animation and graphic design classes are part of the Career Technical Education program of the Santa Clara Unified School District.

In collaboration with the Animation and Illustration Department at San Jose State University, SCHS animation instructor Jay Dold and his students are hosting the 2013 FaultLine Animation Festival May 22, 7 to 9 p.m., at the SCHS Performing Arts Center, 3000 Benton Street, Santa Clara.

“The festival gives high school animation students in the Bay Area the opportunity to show the work they’ve been doing in their classes ‘on the big screen’ and have their projects evaluated by their peers and industry professionals, as well as allowing everyone to see the exciting work that’s being produced in our local high school animation programs,” says Dold.

The public is invited and encouraged to attend this impressive, one-time screening of animations by talented local teens. For 2013 FaultLine Animation Festival information, visit www.faultlinefestival.org.

Once the Dust Settles, More Space at SVACA