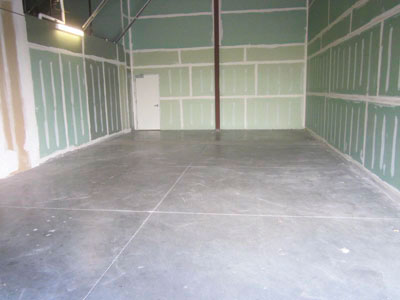 There’s been some dust over at Silicon Valley Animal Control Authority lately.

After the shelter picked up the Mountain View contract for animal services last May, it became clear that the small facility on Thomas Road might not be large enough to cater to the influx of animals. Since the building is still fairly new, moving to another location wasn’t an option. So, in order to expand, SVACA got creative.

“This is our old volunteer room,” said Shelter Manager Michael Limper of the gutted space near the shelter’s bunny area. “This is going to be a cat adoption space. We’re going to put two big rooms in here, similar to the big room in front, with a big window on each side.”

“We’re hoping, it depends on if we have cats or kittens, but [room for] six to twelve,” he continued. “If it’s kittens, we will have at least 12; if it’s adults, at least six. At times we can fit up to five in a room – depending on if they all get along. With kittens, we can sometimes do eight or nine, depending on how big they are.”

In addition to the two new spaces for cats, the shelter is adding six dog rooms in what was the shelter’s storage area.

The expansion, which is being partially paid for by the City of Mountain View, started at the end of February. The project is coming together quickly and scheduled to open sometime in June. The drains have been put in, duct work completed and the frames for the new walls are finished.

While the additional rooms don’t seem like much of an expansion, the space should be adequate for the animals that the shelter will see. “Mountain View has a really high return to owner rate so a lot of the animals coming in from Mountain View are getting reclaimed by their owners, which is great…We’ve also had a good amount of adoptions so far this year,” said Limper. “It’s good because we can put more animals up, even if they’re not from Mountain View – we can take in more guys to put up for adoption. Even though we have a great live release rate already, it might open us up to rescue more animals from other shelters and we will have the space to do so.”

So far, the shelter is keeping its live release rate on par with last year’s numbers. “We finished the year for both dogs and cats combined at 87 percent,” said Limper. “Cats, I think, we are at about 86 percent for the calendar year so far, and dogs, we’re at like 94 percent.”