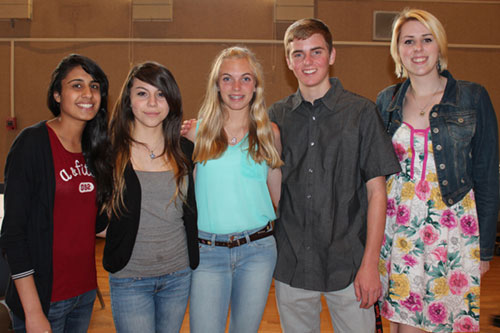 When Ally DiLorenzo visited Coimbra, Portugal back in April, she was fascinated by the monasteries and churches that she saw.

“They were all amazingly beautiful,” recalls DiLorenzo, a freshman at Santa Clara High School. “The churches were very tall because the people there believed that the taller a church was, the closer they were to God.”

Such were the many cultural gems that DiLorenzo and five other local high school students picked up while they visited the Portuguese city for about 10 days last month. To celebrate the return of the Coimbra Exchange Class of 2013, the Santa Clara Sister Cities Association hosted a potluck on the early evening of April 28th at the Santa Clara Senior Center.

“This potluck gives students the chance to show the community and the Sister Cities Association how grateful they are for their support,” says Lynn Hoang, president of the SCSCA. “The students know they were able to go on this trip from scholarships that came from our fundraisers and donors.”

DiLorenzo and other high school students shared their recollections of the trip during a presentation at the potluck.

“The people and the culture [in Coimbra] are so different than how it’s like in America,” says Megan Moreno, a freshman at Wilson High School. “The first night we went out, there were lights, music, and dancing. The people there just knew everyone else when they went out.”

“They have amazing castles in Coimbra,” says Karnjot Malhi, a senior at Santa Clara High School.

“It was nice to meet back up with my friend, Rodrigo, who visited here last year,” says Tyler DiLorenzo, a junior at Santa Clara High School.

At the potluck, people eagerly scooped food from the buffet onto their plates. Other highlights of the event included a raffle drawing. Lucky winners were able to bring home an assortment of prizes, including a fashion design kit, wine with glasses, a home spa kit, and candy and snacks.

SCSCA corresponds with the citizens of two sister cities- Coimbra, Portugal and Izumo, Japan. The organization aims to foster relationships among people from varying cultures. To offer opportunities for educational development among young people who live or attend school in Santa Clara, SCA fundraises for both high school and junior high exchange programs. Visit http://www.santaclarasistercities.org to learn about future events.