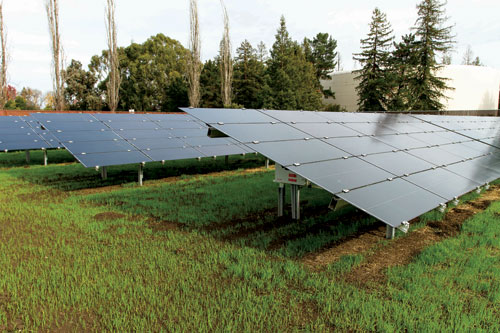 “The project demonstrates a new level of cooperation between our business community and SVP,” said SVP Director John Roukema. “This is a significant step to determine the potential of partnering with local companies as well as utilizing land for energy production that otherwise would remain vacant.”

Built on a limited-access parcel that’s bordered by Agilent Technologies, Interstate 280 and Jenny Strand Park, the installation will generate 100 kilowatts (kW) of electricity – enough to power 26 homes. It will also prevent as much as 72 metric tons of carbon dioxide from entering the atmosphere – pollution that would otherwise be created by fossil fuel electric generation.

Vista Solar of Santa Clara was the installation contractor for the 1.5-acre PV array, which is the second community solar project finished in Santa Clara since summer. Henry Schmidt Park received a 15kW rooftop system that was funded by an Energy Efficiency and Conservation Block Grant from the U.S. Department of Energy (DOE) and the American Recovery and Reinvestment Act (ARRA, aka The Stimulus Program).

Santa Clara’s green energy program has received $14.8 million from cap-and-trade program, according to the city’s most recent financial report. “The policies we’ve set through Silicon Valley Power are not just a benefit to the health and well-being of the city,” said Council Member Jamie McLeod at the Dec. 4 Council meeting, “but a financial benefit to the city as well.”