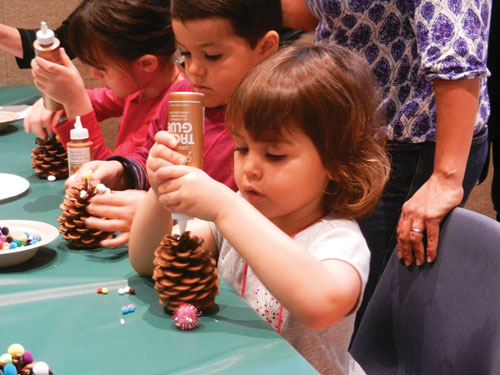 Sponsored by the Parks and Recreation Department, families could sign up through the activity guide, and, for a modest registration fee, have a pancake and sausage breakfast cooked by the SCHS Athletic Boosters, take part in a variety of crafts and get their photo taken with Santa Claus.

“There’s an elf ornament, a holiday gift bag, a little reindeer candy bar craft, a pinecone tree, a snowman ornament and then there’s a thumbprint Christmas tree,” said Recreation Supervisor Susan Diatte. “They can also color the placemats and there’s games like seek-a-word on the table for them…[Each child] gets a passport and as they do the craft the passport gets stamped and [during the craft time] we call up five at a time to take their photo with Santa.”

“It’s a wonderful event,” said Randy Rose, president of the SCHS Athletic Boosters. “As a matter of fact, I have a grandchild that’s a year old and next year will be the first year that he’ll come, so I think it’s pretty cool that they do it for the kids and families. Plus it’s the perfect time. It’s the first of the month so the kids get excited about Santa and then they do the arts and crafts. It’s a nice family day.” Rose has been part of the event for the last 12 years and led the kitchen “staff,” which included several booster board members, in preparing the breakfast.

Parks and Recreation dance instructor Linnea Sheehy brought her family, including four-year-old Cole and two-year-old Mason to the event for the fourth year. “We started coming when [Cole] was a baby and my in-laws are here with us so this is our annual family visit with Santa,” said Sheehy, who coordinated the family in matching red, grey and black sweaters.

“This is the best event we attend,” continued Sheehy. “It’s the best family function. It’s low-key so they take the kids’ numbers and they aren’t waiting for Santa long. It’s very organized…For people who never have attended, they really should. It’s incredibly affordable and it’s a great experience that we do every year. My kids love it. They look forward to seeing Santa. They’re not afraid of him because it’s this type of setting. They make it so warm and comforting that the kids are comfortable. For the price it’s great – they get all the arts and crafts and they get breakfast.”

Those interested in attending next year’s event can register when the 2013 fall activity guide comes out next summer. “It’s for the community, said Diatte. “It’s become like a family tradition [for most families].”

Community Public Safety
Author Erika TownePosted on December 6, 2019
Even though it was pouring rain at some points Saturday morning, Sunnyvale Community Services (SCS) says its annual Rides for Toys event was a...
Community
Author Carolyn SchukPosted on July 20, 2016
Farmers’ Market: The Downtown Santa Clara Farmers’ Market is now open all year round. The market opens every Saturday from 9am-1pm. The popular market...

Community
Author Diane AndrewsPosted on December 10, 2014
Not content to keep their blessings to themselves, former Santa Clara mayor Larry Marsalli, 88, Elise, his wife, their three children and their families-four...
SPONSORED