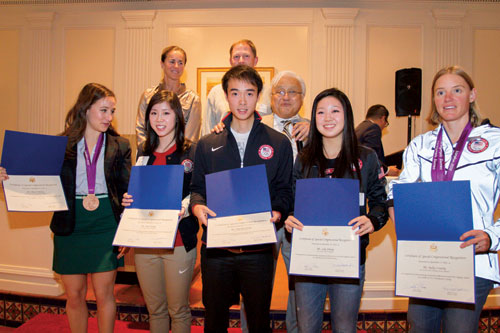 “You have made history and you’re part of the future,” SCU Chancellor Fr. William Rewak, SJ told the gathering of friends and families of the Olympians. “We acknowledge you, your coaches, and your families. You have added a significant page to our own history.”

Judo bronze medalist Marti Malloy aimed to make history by being the first U.S. judoka to take home the gold. Although she didn’t achieve that in London – she says she’s aiming for Rio in 2016 – she earned a bronze against former Olympic champ Giulia Quintavalle of Italy.

Malloy, who began studying judo at six, is a San Jose State University graduate (2010) and assistant coach. She has also taught judo clinics in the area, including one recently at Cabrillo Middle School in Santa Clara.

“The experience of the Olympics was absolutely amazing,” said Lily Zhang who represented the U.S. in women’s table tennis in London. Zhang, a graduate of Palo Alto High School, trains at the India Community Table Tennis Center in Milpitas – described by Sports Illustrated as “the epicenter” of U.S. table tennis. Like Malloy, Zhang aims to be in Rio in 2016.

Honda – a man long known for his firecracker energy level – conceived the event, he said, after discovering that several of the London table tennis competitors were from the South Bay.

Recognizing that while many remarkable athletics compete in the Olympics, relatively few receive media attention, Santa Clara’s congressman decided to spotlight some of those unsung athletes.

“It’s wonderful to acknowledge you who have spent so much time to perfect a sport,” he said. “It’s a reflection of character.”

Wang – who, like Zhang, trains daily at the India Community Table Tennis Center in Milpitas – was playing table tennis before he could walk. “My parents loved table tennis and they would sit me on the table when I was a baby.”

Also on the agenda was the South Bay’s own women’s soccer champion and Olympic gold medalist Brandi Chastain. Chastain is on the board of SCU’s Institute of Sports Law and Ethics (law.scu.edu/sportslaw), which will soon announce its first annual sportsmanship awards. Last September, the Institute held its third annual Sports Law Symposium.