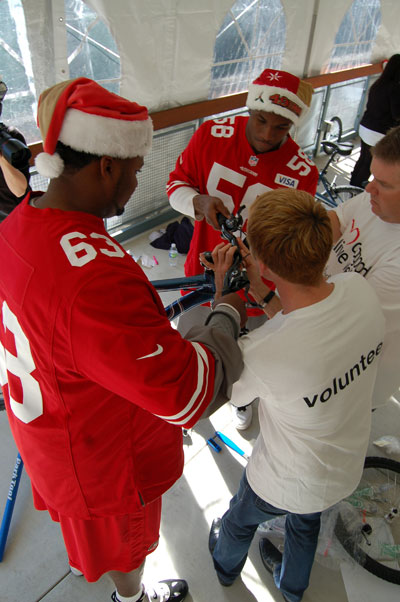 Rather than darting spirals aiming for touchdowns, vaulting down the sidelines, gaining first downs or tackling their opposition while vying for gridiron supremacy, several 49ers recently played Santa’s helper, assembling 49 bicycles for children.

Spreading holiday cheer, 49ers players, including rookies Darius Fleming, Michael Thomas, Tony Jerod-Eddie and Cam Johnson were among the many contributing their time, serving as elf toymakers on December 10 at the team’s headquarters and training facility in Santa Clara.

Joining the players were UnitedHealthcare employees and members of the Optum Pro Cycling team. The bikes were delivered the following day to surprised youth at Bill Wilson Center in Santa Clara during a health and bike fair, which included 49ers alumni Guy McIntyre and Dennis Brown, UnitedHealthcare volunteers and Optum Pro Cycling team members helping kids learn about bike safety and healthy living.

BWC supports and strengthens the community by serving youth and families through counseling, housing, education, and advocacy.

Turning Wheels for Kids is part of UnitedHealthcare’s commitment to help people live healthier lives in the local community. The mission coincides with the 49ers’ PLAY 60 campaign, which encourages kids to “Get out and play, 60 minutes a day.”

Visit www.turningwheelsforkids.org for additional information on Turning Wheels For Kids.

The 49ers Foundation, the non-profit community funding extension of the San Francisco 49ers, now in its 19th year, supports development programs for underserved youth that keep them “Safe, On Track and In School.” A significant portion of the foundation’s funding goes toward family violence prevention programs and activities that teach youth leadership and respect.

Through the leadership of 49ers team owners Denise and John York, the 49ers Foundation has donated more than $10 million over the last eight years to non-profits throughout the San Francisco Bay Area.

Visit http://www.49ersfoundation.com/ for more information on the 49ers Foundation.

Op-Ed Opinion
Author Dominic CasertaPosted on August 30, 2017
During my Economics class discussion on circular flow, the diagram of money moving in and out of the U.S. economy, one student we’ll call...

Op-Ed
Author Robert HaughPosted on October 3, 2012
Taking a step away from the intensity of the gridiron less than 24 hours after their dominating 34-0 victory over the Jets, 49ers TE...
SPONSORED