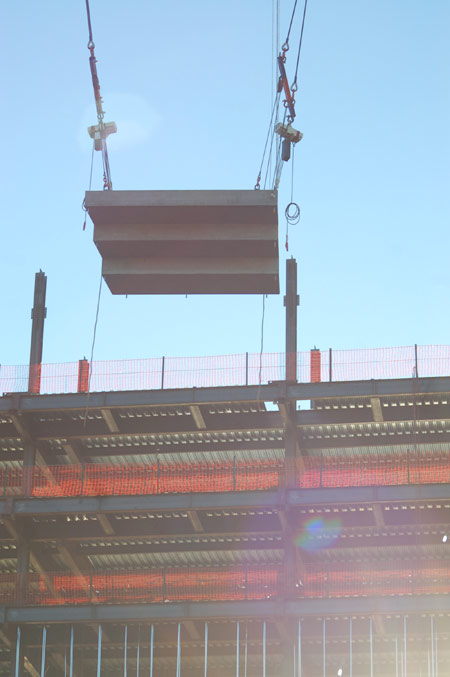 Inching closer to completion, another major milestone was reached in the rapid progress of the construction of the new 49ers stadium in Santa Clara, with the first sets of precast concrete hoisted into place on November 5.

Two thousand prefabricated concrete sections will serve as supports for the stadium’s treads, risers, and steps for seating, as well as various stadium walls. Clark Pacific, the West’s largest precast concrete firm completed the precast work at its plant in Woodland, CA.

“It’s gone extremely well,” Project Executive Jack Hill stated at a media briefing. “Frankly, it’s been more rapid than any project I’ve been on because it’s well-organized. There’s a great spirit of cooperation between the Sports Authority, the City, the 49ers and the community.”

As of November 5, Hill estimates 80 of the 2,000 precast concrete pieces have already been installed at the stadium site, which is now 22 percent complete with 70 percent of structural steel complete. It’s expected the steel structure will be completed by the end of this year.

“This is a real source of pride for the entire City of Santa Clara, for the entire region and it should be for the state of California,” said Mayor Jamie Matthews, adding he is proud of the steady increase in on-site construction workers. Hill estimates that 550 workers visit the site daily, an increase from the 440 workers on site each day in October, with many of the workers from the area.

Stadium workers are now on two shifts, with steel being installed daily from 7:30 a.m. to 3:30 p.m. and precast concrete installation from 4 p.m. to midnight. In addition to the steel frame’s completion and installation of precast concrete, sports lights are being assembled for one side of the building, opposite of the team’s headquarters.

• The stadium will have more than 40 million pounds of precast concrete.
• The panels range in size between 20-40 feet and weigh up to 35,000 pounds each.
• The special precast concrete mix for the stadium uses 15 percent cement replacement, effectively lowering the project’s carbon footprint by over 500 tons of CO2.
• The stadium will have 10,000 steps and landings, which adds up to more than a mile of steps. If stacked in one building, it would be 580 stories from ground to rooftop.
• Approximately 90 miles worth of stressing cable will be used in the precast pieces, the approximate distance from Clark Pacific’s Woodland plant to the new stadium site.
• Approximately 18,000 tons of steel will support the 1.85 million square foot stadium – the equivalent of 3,000 elephants.
• Over 3,000 foundation piles were drilled at an average depth of 55 feet.
• Over 50 miles of pipe have been laid underground.
• 17,000 cubic yards of concrete has been poured, equivalent to the foundation slabs for 340 2,000 square foot homes.