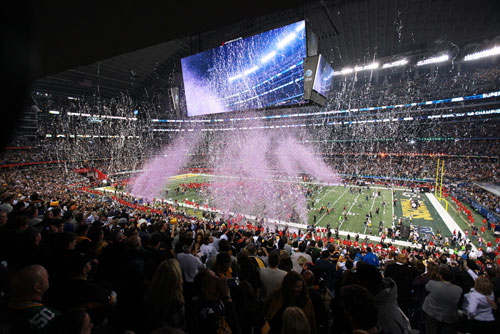 Imagine 70,000 football aficionados flocking to Santa Clara to see Vernon Davis, Alex Smith, Patrick Willis and the 49ers strutting onto the field in February 2016 for the Golden Jubilee at the Super Bowl 50 here in Santa Clara. Imagine local hotel rooms, restaurants and other businesses thriving for over one week.

NFL commissioner Roger Goodell announced on October 16 that the 49ers stadium will be vying to host Super Bowl 50 against South Florida (Miami Dolphins), while the host City not selected for the 2016 Super Bowl will compete against Houston (Texans) for the 2017 granddaddy of sports events

Though the official campaign to bring the Super Bowl to the Bay Area began with a news conference in San Francisco on October 18, hosted by SF Mayor Ed Lee, Santa Clara will see many benefits without dishing out the expenses of a bid package. Lee and other Bay Area civic leaders, albeit none representing Santa Clara, unveiled official marketing materials, including a Super Bowl logo featuring the Golden Gate Bridge. The website, www.SFSuperBowl.com was also announced.

Besides bringing worldwide spotlight to their community, the Super Bowl brings in thousands upon thousands of hungry, sleepy and entertainment-seeking football fans from across the world – a reason why nearly every stadium site in the NFL vies to host the mega of sporting events, the Super Bowl.

“We are excited to bid for the first Super Bowl in the Bay Area since January of 1985. Nothing brings a region together like a Super Bowl. Now we have to work together to show the new stadium in Santa Clara will put on a great show,” said 49ers CEO Jed York said in a statement.

“I am extremely proud that Santa Clara is on the short list for the 50th Super Bowl and the vision and commitment of our council, community and partners to make the stadium a reality. The economic impact will be profound as both teams, their players, support staff, families and tens of thousands of fans come to Santa Clara and the Bay Area bringing with them excitement, revenues and recognition of the greatest place to live in the world,” stated Mayor Jamie Matthews, adding, “Before our stadium has even opened, Santa Clara is now at the epicenter of excitement for the entire Bay Area. To be in contention for the 50th or 51st Super Bowl, while our stadium is still under construction, shows just how important Santa Clara will be to the NFL to bring Super Bowls for years to come.”

Hosting a Super Bowl is a tremendous economic engine for host cities, with hotels and other travel-related businesses having seen an astronomical surge due the Super Bowl arriving at Lucas Oil Stadium in Indianapolis earlier this year.

“Being named last week as a finalist city to host a Super Bowl in 2016 or 2017 is an amazing accomplishment for the City of Santa Clara … As the host of the Super Bowl, our hotels, convention center, restaurants and surrounding neighbor cities will receive unprecedented business, economic impact and recognition for creating an atmosphere that is safe, easy to access in a world class setting,” said Steve Van Dorn, President & CEO, Santa Clara Chamber of Commerce and Convention-Visitors Bureau.

According to data from TravelClick, Indianapolis experienced a vast boom in hotel occupancy, with occupancy surging nearly 400 percent from the same period in 2011.

“We feel very confident that, at a minimum, the Super Bowl will have generated $155 million in economic impact over a four day period,” said Indianapolis Convention and Visitors Association spokesman Chris Gahl. It is estimated that over the duration of Super Bowl festivities, over 600,000 people visited Super Bowl Village in Downtown Indianapolis.

The NFL indicates an average economic impact of the Super Bowl on a host city ranges from $150-$400 million and is contingent on many factors. NFL owners will vote on host cities for both Super Bowl bids during an NFL meeting in May 2013.

With seven million people in the Bay Area and average temperatures above 50 degrees in February, plus California’s Great America, the award-winning Santa Clara Convention Center, along with our luxury hotels and restaurants, Santa Clara has the infrastructure and attractions to host an amazing Super Bowl experience. Santa Clara is an exciting place to live, work and play. Why imagine, the Super Bowl is coming to Santa Clara soon.