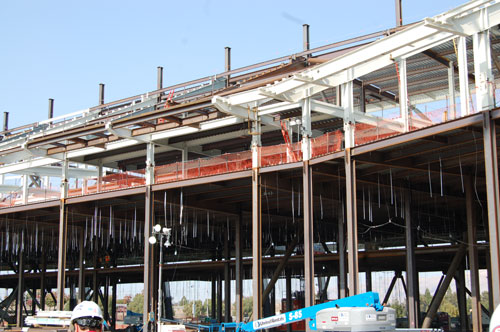 With 14,000 pieces of steel weighing approximately 18,000 tons trucked in, the towering steel skeleton of the 49ers’ 68,500-seat stadium sits adjacent to California’s Great America. Construction is well underway, and about 25 percent of the steel beams have been installed as of September 25.”

Over 3,000 foundation piles were drilled at an average depth of 55 feet, and over 50 miles of pipe laid underground. Prior to foundation piles being drilled, over 30 miles of underground electrical conduit was laid – something very unique for large projects. And the topper: it was done in just 14 days. Four giant “Biggie” cranes, to which there are less than 30 in existence, are utilized in placing heavy items and have a reach of over 300 feet.

According to Stadium Project Executive Jack Hill, the stadium is an estimated 15 percent completed, with nearly 50 percent of the 14,000 pieces of steel in place. Hill says that Northern California’s mild weather benefits construction progress.

The 18,000 tons of steel utilized in supporting the 1.85 million square foot stadium weigh the equivalent of 3,000 elephants, while the over 17,000 cubic yards of concrete being poured is equivalent to foundation slabs for 340 2,000-square-foot homes. The largest steel beam weighs 36,000 pounds and is 90-feet long.

With over 400 workers on site, the stadium is on-track to open for the 2014 NFL season, with the nine-level structure already in the fifth level of construction, and the sixth starting soon.

According to Hill, the 400 workers on-site is an increase of more than 100 from a month ago, as construction moves in a steady pace. Among those on-site are masons, electricians, plumbers and ironworkers; most working double shifts with construction workers from 6 a.m. to midnight.

The next phase of construction will involve placing pre-cast concrete to make way for stadium seating to be placed on top of steel support beams. These are being erected late October, with lights and more interior work coming shortly thereafter.

Interior designs are being finalized, including plans for the Edward J. DeBartolo Sr., San Francisco 49ers Hall of Fame, which fans will see immediately when entering the stadium on the North End Zone. The Hall of Fame is being constructed in conjunction with the 49ers team store.

The 1.9 million square foot stadium is expected to become LEED (Leadership for Energy and Environmental Design) certified, a first of its kind for such a massive project. The stadium is expected to have photovoltaic panels, a green roof, excellent public transit access, convenient bicycle parking, a walking path access from the San Tomas Creek Trail, water-conserving plumbing fixtures, sophisticated building control systems, recycled materials, and a long list of other sustainable design concepts contributing to the greenness of the stadium.

The new stadium will feature open pedestrian plazas, commercial community space, 49ers team store, and 49ers Hall of Fame. The stadium is designed to accommodate an array of events including professional and college football, soccer, motocross, concerts and civic events.

For more information on the stadium, visit http://newsantaclarastadium.com

To view live streaming video of the construction, visit http://newsantaclarastadium.com/live-view