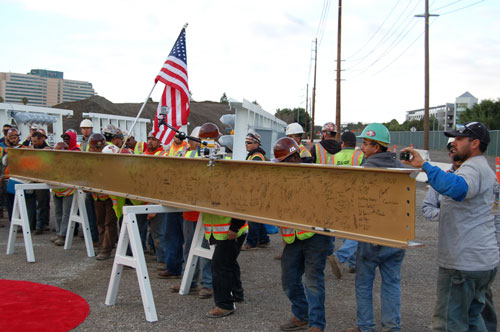 Inching closer to reaching the end zone in the progress of the stadium, a ceremonial “topping out” ceremony commemorating the uppermost structural steel beam being erected to the highest point of the stadium was held on December 6.

Following brief remarks from Mayor Jamie Matthews and 49ers CEO Jed York, the beams, adorned with an American flag and a Christmas tree, were lifted over 200 feet to top the 68,500-seat stadium’s mammoth steel structure. The American flag and evergreen tree were selected to top the beams to signify growth and luck.

Signed by over 800 people, including: 570 construction workers; 49ers players, management and staff; and City officials, the beams were hoisted into place, taking place atop of the suite towers at the 50-yard-line.

Steel workers began the framework in July, with steel construction progressing rapidly, with four cranes each lifting at least 50 pieces of steel daily. Steel construction is over 90 percent complete.

Concrete work is close to being finished as well. Stadium project executive Jack Hill estimates 50 percent of the concrete floors have already been completed on the stadium’s ground level. The installation of precast concrete continues includes the stadium’s treads, risers, and steps for seating, as well as various walls.

In the coming months, interior projects will begin, including duct work and preparing utilities for restrooms, concessions and suites. The nearly $1 billion project will serve as home to the five-time Super Bowl champions.

The stadium will contain more than 40 million pounds of precast concrete and have 10,000 steps and landings, adding up to more than a mile of steps. If stacked in one building, it would be 580 stories from ground to rooftop.

Turner/Devcon, the general contractor for the project, hosted a worker appreciation lunch onsite prior to the ceremony. Workers have clocked an estimated 475,000 hours on the stadium project through December 6.

A live webcast of the stadium construction can be viewed at http://www.newsantaclarastadium.com/live-view.

Op-Ed
Author The Editorial BoardPosted on January 17, 2019
Before we welcomed the New Year, a malware attack struck major journalism outlets. The attack affected the production and delivery of some of the...

Op-Ed Opinion
Author Carolyn SchukPosted on December 20, 2017
The word “magical” generally makes those of us on cliché patrol reach reflexively for the red pen. Especially when used in close proximity with...
SPONSORED