The 49ers’ new stadium in Santa Clara is making waves in nearly every way imaginable.

As one of the Founding Partners for the new stadium, and the exclusive sustainable energy provider of the 49ers, NRG will install a number of state-of-the-art solar elements, including three solar array-covered bridges, a solar canopy above the green roof on the suite tower portion of the stadium and solar panels over the 49ers training center.

With a total peak capacity of about 400kW, the solar arrays will provide enough power over the course of a year to offset the power consumed at the stadium during 49ers home games. As a result, the stadium will be the first professional sports venue in California to achieve net zero energy performance.

One of the most unique features of the stadium is the green roof atop the suite tower on the west side of the stadium. The three solar bridges, connecting the main parking area to the stadium, will include hundreds of solar panels — the first in the NFL.

In addition to the solar array, green initiatives featured at the new stadium include public transit access, bicycle parking, a walking path from the San Tomas Creek Trail, water-conserving plumbing fixtures, recycled materials and an array of other sustainable design elements. NRG will continue to explore additional opportunities to help enhance the stadium’s sustainability efforts such as installing electrical vehicle charging stations.

NRG is currently building the nation’s first comprehensive, privately funded electric vehicle charging network and is the largest solar power company in the United States with more than 900 megawatts of solar generation in operation. 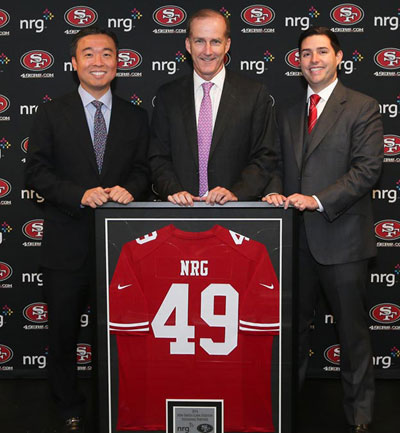 Exclusive Malt Beverage Partner Named
The 49ers and Anheuser-Busch recently announced Bud Light will be the official and exclusive malt beverage partner of the 49ers, as well as the new Santa Clara Stadium, beginning in 2014.

Anheuser-Busch becomes one of 10 expected Founding Partners. As part of the 10-year agreement, Bud Light will receive entitlement of the stadium’s fan deck, an interactive area located on the north side of the stadium under the scoreboard.

Additionally, Bud Light will be featured through digital and permanent signage throughout the venue. Bud Light will also help promote a positive game day atmosphere in the stadium with the inclusion of the Good Sport program, which encourages adult fans to drink responsibly and respect other attendees. The program also includes the implementation of a safe-ride home campaign, which encourages fans to pledge to be designated drivers at the Bud Light Good Sport booth and rewards them for getting their family and friends home safely from the game.

“This is a great opportunity for Bud Light to secure exclusivity with one of the league’s premier franchises, and ensure the brand is well-represented in the team’s new state-of-the-art stadium,” said Blaise D’Sylva, vice president of media, sports & entertainment marketing, Anheuser-Busch.

The stadium will not only be the new home of the 49ers, it will also serve as one of the world’s premier outdoor sports and entertainment venues. Designed by HNTB and being built by Turner/Devcon, the $1.2 billion venue will cover 1.85 million square feet, seat approximately 68,500 and feature an expected 165 luxury suites and 9,000 club seats.

esigned to be a multi-purpose facility with the flexibility to host a wide range of events including domestic and international soccer, college football, motocross, concerts and various civic events, the stadium will be expandable for major events such as the Super Bowl.

Op-Ed
Author Erika TownePosted on March 4, 2022March 12, 2022
Dear Diversity, Equity, and Inclusion Task Force Members: First, I want to commend you on deferring the topic of an Elected Police Chief until...

Op-Ed
Author Press ReleasePosted on January 24, 2022
Silicon Valley is the envy of world. We boast an innovative tech sector that drives the American economy, a workforce that’s second to none...
SPONSORED