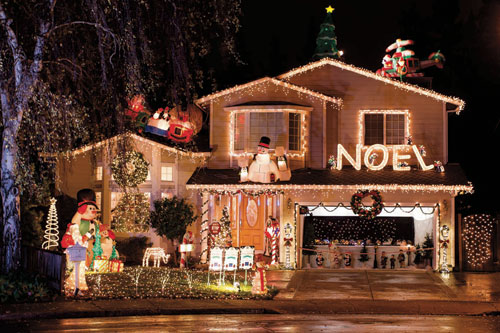 You can save yourself some airfare to the North Pole this holiday season by simply taking an outdoor tour of Santa Clara’s most dazzling houses whose residents have been recognized by the City of Santa Clara for having this year’s best decorated houses with seasonal themes.

“We ran this contest to promote the holiday spirit and community involvement,” says Elizabeth Elliott, office specialist with the city manager. “The judges were volunteers from the senior center. The judging criteria were based on four areas – lighting, festivity, use of color, and originality. We did something new this year, which was that we took the nominations online through our web site, and that was very successful. We ended up with 31 nominations. And from those nominations, we picked most of our winners.”

Winners have set special signs outside their homes and will receive Certificates of Appreciation at a city council meeting in early January. The winners for best decorated individual residences are: The Berner home at 2583 Johnson Place, the George home at 1882 Homestead Road, the Crocker home at 4292 Burdick Lane, the Bunce home at 1451 Lincoln Street, and the Driscoll home at 1845 Graham Lane. Seniore’s Pizza at 940 Monroe Street got the award for the best decorated business. The award for the best decorated neighborhood went to a street in the Rivermark neighborhood, which runs from 4292 Burdick Lane through 4392 Burdick Lane. The best tree is at 704 Valley Way.

The Jones home at 964 Capitola Way received a special recognition award – this home had not been nominated but was recognized by judges for its eye-catching decorations as they toured the other nominees’ houses around the city. David Jones says it was a team effort among himself and his parents, Catherine and Harold, to decorate their house.

“We have a nativity scene with Joseph, Mary, and Baby Jesus,” Jones says. “We also have a couple of reindeer and a couple of lighted trees. It took a week to get everything all set up. The main challenge was trying to find time to do this when it wasn’t raining. The two neighbors next to us also have quite an extensive display, and we have quite a few cars that come by our houses right before Christmas to see our lights and our work.”

For Jan Berner, this is her third year winning an award for having one of the best decorated individual residences.

“It’s wonderful to win,” Berner says. “I love the holidays. I love Santa Clara. It’s so neat that they do this. It’s such a magical time of year. The lights and decorations here are so beautiful and festive.”

At the Berner home, a lighted NOEL rests on the roof with a penguin on the letter L. Also gracing the roof are some blow-up structures of two igloos, a helicopter holding Santa, and a train. On the ground, Santa reappears waving to visitors in a chair. Standing on the grass are a couple of snowmen blow-up figures and an angel off to the side.

Like Berner, this is Rick Crocker’s third year winning the award for having one of the best decorated individual residences. Not only is Crocker pleased to secure another win, he is proud of his neighbors’ work in decorating their homes to help the street, connected by a line of lights along the hedge, earn the best decorated neighborhood award.

“Our layout this year is similar to last year’s,” Crocker says of his home’s outdoor decorations. “We still have Santa Claus taking off on a plane on a runway. We added a gingerbread house this year as well. Some of our neighbors say their kids have to walk by my house every night before going to bed.”

Eye-Opening Visit to the Holy Land

Community
Author Larry SacksPosted on August 2, 2017
Over 50 gatherings took place throughout Santa Clara in celebration of National Night Out (NNO). Residents got creative and pulled together large and small...

Arts & Entertainment Community
Author Alissa SorotenPosted on July 18, 2018
The multicultural performances at the weekly Family Fun Nights put on by Santa Clara City Library Foundation and Friends have been drawing crowds all...
SPONSORED