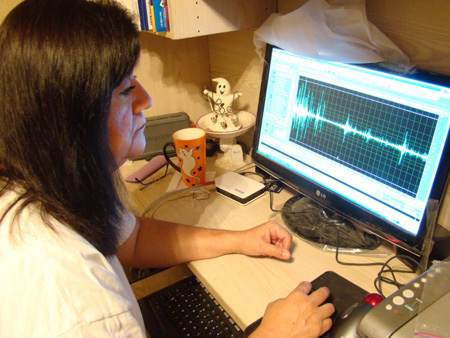 As Halloween approaches, people are becoming engrossed with things that go bump in the night. Many see Halloween as a spooky holiday where the living and undead become closely aligned and when friends get together to see if they can reach out and touch the other side.

Unfortunately, many of these investigations are unauthorized and quickly go from fun to a foot chase between themselves and the police. Those ghost hunters give the ones who are serious about the paranormal a bad name and with shows like Ghost Hunters, Ghost Adventures and Paranormal State, the interest in investigating spirits is at an all-time high. However, unbeknown to most, Santa Clara has its own set of paranormal investigators, Ghost Trackers Paranormal Research Group.

Started in 1992 by founder Gloria Young, Ghost Trackers began “as a group of friends who were curious, but didn’t know what to do or how to do it. In those days there wasn’t a lot of information about ghost hunting,” said Young. “Our idea of ghost hunting was entering a cemetery at night with flashlights, walking around – not on the graves – we weren’t trying to be disrespectful – and then having a water balloon fight…Finally, one of us wondered if there was really a ghost in the cemetery and that piqued the interest of how to go about an actual ghost hunt. Unfortunately, there wasn’t a whole lot of information, books or otherwise, to give us instructions and so it was a lot of hit-and-miss. I read everything I could get my hands on, which was probably a handful of books, to learn as much as I could. Over time, all of my friends went other ways and I was the only one left. I kept trying to learn and eventually the Internet was born and found a handful of people who were ghost hunters and we began conversing. I finally found people who were close by and also interested and under the stealth of anonymity, we would ghost hunt.”

Before an investigation occurs, Ghost Trackers researches the property, the people who used to live there, talks to the people who currently live there, and always tries to do a walk-through prior to the investigation. “Ninety percent of the time we receive a call or e-mail from people asking for help or even wanting some publicity for their building,” said Young. “We have a large following being the oldest and most established and since ghost hunting is so trendy now, owners of buildings understand that the publicity we bring is worth it. Sometimes we call owners of buildings asking for permission for entry. We never enter anyplace without permission. That’s the one bad things about ghost hunting. Many people would rather forego the ‘right’ way to do things and just enter someplace because they want to. That makes it bad for those of us who have been doing it the right way all along. We have very high standards and teach that.”

Untrue to popular belief, not every investigation leads to an encounter with a ghost. “How real things are is how intimate you are with the place,” said Young. “Everything has its moments and paranormal activity is all about hit-and-miss and timing. You have to be in the right place at the right time. We believe ghosts don’t have a time factor as we do with day and night. Hauntings take place during the day or night but you have to be in the right place to see or hear the activity… Most of the time it’s very boring – waiting, watching, trying to stay awake, lugging equipment in, setting up, putting it down, lugging it out and through all that, if you’re lucky, there will be activity.”

Despite the boring moments, Young loves what she does and credits her father for feeding her interest in the paranormal, as he always had a ghost story to tell. She also claimed to have been an unbeliever. “I was a big skeptic in the beginning but over time and with many, many experiences I have changed my mind. We have changed the minds of many skeptics. Paranormal experiences are not limited to those that are open-minded or believe. It can happen to anyone if you are paying attention,” said Young.