Like many places in the Bay Area and California, the City of Sunnyvale lacks local laws that govern rental rates for housing. Rents have skyrocketed in Silicon Valley in recent years and Sunnyvale is no exception with the median price for a one-bedroom at $2,570 according to Zumper’s San Francisco Bay Area Metro Report: June 2019. 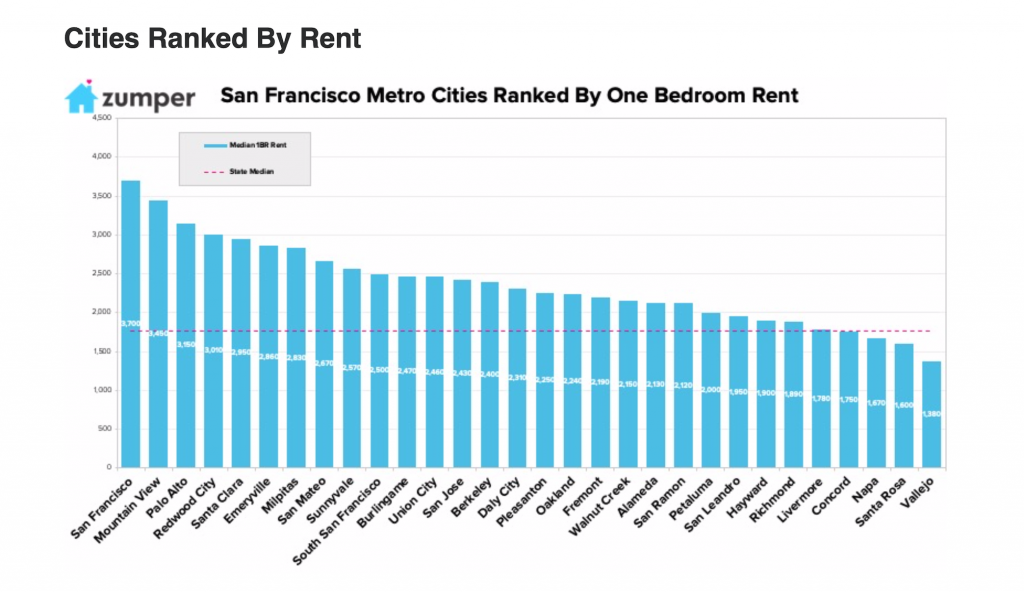 Although Sunnyvale remains one of the priciest places to rent an apartment nationwide, the city’s rents have actually softened, dropping by 11.7 percent from June 2018 for a one-bedroom unit. In contrast, the Silicon Valley cities of Mountain View, Palo Alto, Milpitas and Santa Clara all experienced rental rate gains over the past year.

A report by the National Low Income Housing Coalition, Out of Reach 2019, looks at the gap between earnings and housing costs for the most populous counties around the country, and shows that 9 of the top 10 most expensive counties in the U. S. to rent are in California. Seven of the top 10 counties are in the Bay Area including Santa Clara County.

The housing affordability crisis, illuminated by that report and many others, has plagued California and prompted the state Assembly to pass AB 1482, which limits annual rent increases to seven percent plus inflation, exempting landlords with 10 or fewer single family homes or new housing. The legislation is set to expire in 2023 but would need to pass through the Senate and be signed by Governor Newsom before being enshrined into law. AB 1482 was drafted with an accompanying bill, AB 1481, which would have mandated just cause evictions, but did not make it through the Assembly. However, AB 1482 was subsequently amended to include just cause eviction policies, so if ultimately passed would protect tenants on multiple fronts.

“It’s a good first step for renters in Silicon Valley where we’ve seen over 10 percent year-over-year increases,” said Kevin Zwick, CEO of Housing Trust Silicon Valley (HTSV). “There hasn’t been a drop off from new housing getting built. I think that the rent cap will provide some relief to current renters while not interfering with the functioning of the real estate market. Seven percent plus inflation is just under 10 percent; it could be more, so I hope that this is just a first step.”

Emily Hislop, a Senior Case Manager in the dispute resolutions division for Project Sentinel, works towards creating equity between tenants and landlords in Santa Clara County and beyond. She fields calls from both renters and landlords and sees a large power imbalance between renters and landlords in Silicon Valley. “With the housing crisis renters don’t have any options,” she said. In the past three years, Hislop has witnessed rent increases of more than 25 percent in the Valley.

“Most of Santa Clara County lacks any renter protections; San Jose and Mountain View have put in some protective laws,” she added. “Discussion about rent control is heating up locally in Hayward and other places.”

Although Sunnyvale currently lacks any form of rent control, the City has embarked on a Housing Strategy initiative in an attempt to address the issue of housing affordability within its borders.

“We haven’t done a deep analysis of AB 1482,” said Trudi Ryan, Sunnyvale’s Community Development Director. “We generally take the position that local control is better because we can develop policies and regulations that fit our community.”

When members of the community raise concerns about the cost of housing with City staff, they’re informed about a Housing Strategy that’s currently under development. The initiative kicked off in 2017, when City Council selected the topic to be studied in depth to “holistically examine the overall local housing context given growing concern about housing affordability and availability in Sunnyvale and our region.”

The Housing Strategy depends on a comprehensive study that’s currently underway. The results of the study are expected by the end of 2019 and City Council will review the draft sometime in 2020. According to Ryan, it’s possible that a broad rent control measure could be incorporated into the strategy, however so far all that’s been discussed has been a potential rent control ordinance that covers mobile home parks. Ryan said that Council had declined to pursue an independent study of rent control for apartments but that the topic could still be studied as part of the overall Housing Strategy.

Ryan explained that a large mobile home park in Sunnyvale had a longtime owner who had kept rents relatively low. When the Park was purchased by a new owner the rents subsequently increased beyond what many of the tenants considered affordable. The City then held a community meeting for mobile home tenants and another for mobile home park property owners to gather input about the issue. These meetings were the beginning of what will be many outreach events for the Housing Strategy as a whole, as the City is actively seeking community input on housing. Though a date hasn’t been set, the next one is planned for August and will likely cover the topic of “age-friendly” housing.

In May, City staff surveyed residents of six mobile home parks on topics related to the Housing Strategy. Of those who participated, 91 percent ranked rent control/stabilization as their preferred policy for addressing the affordability issue at mobile home parks.

“Sunnyvale has taken a leadership role in housing services since the 1980s,” said Ryan. “Doing something about housing isn’t new for Sunnyvale. We try to be ahead of the curve.”

In addition to protecting renters, Zwick said that HTSV promotes housing preservation and housing production as three essential components to alleviating the housing crisis. In terms of Sunnyvale’s housing production, there are currently 5,000 new housing units in the City’s development pipeline. In 2017 the City planned for a growth of 12,800 units within its Land Use and Transportation Element. Additional units are also being considered in the Downtown Specific Plan, The Lawrence Station Area Plan, El Camino Real Specific Plan and Moffett Park Specific Plan.

Update: This article has been updated to reflect an amendment made to AB 1482.