This October, a driver struck and seriously injured three children walking to Peterson Middle School at the intersection of El Camino and Poplar in Sunnyvale. The next day, parents, students and teachers came out in force to Sunnyvale’s City Council to demand safety improvements. This intersection is in the city’s “high injury network” identified in our Vision Zero Plan: the 7 percent of our roads that account for 60 percent of serious crashes.

Vision Zero is an international movement to completely eliminate serious crashes, based on the principle that “traffic deaths are unacceptable and preventable.” The Vision Zero Plan that Sunnyvale passed this summer is, for the most part, excellent. But Council also weakened one of the plan’s key principles, changing Principle 3 from “Safety takes priority over efficiency” to “Safety is a primary consideration in the development of transportation projects for all users.” Council feared the original language was a blank check to slow traffic.

This was a mistake. The original language constituted an objective mandate: safety comes first. The new language leaves safety as just one consideration among many, failing to commit the city to prioritizing safety over vehicle throughput. Only Councilmember Nancy Smith dissented.

Let’s speak plainly: cars are putting our children’s lives, health, and futures at risk. Car crashes are the leading cause of death for American children, over-reliance on cars causes childhood asthma and obesity, and tailpipe emissions are driving climate change, threatening our children’s futures. Car-dependency is a crisis, and Council should act to address it.

First, Council should fix Vision Zero by restoring the original language of Principle 3 to make it clear that safety comes first. Alternatively, they could change it to say that “Safety is the primary consideration”.

Second, the city should work to urgently address our High Injury Network. Current planning and bid processes for road improvements take far too long. We should follow the lead of cities like San Francisco, San Jose, and Berkeley and use quick build infrastructure to provide immediate safety improvements. 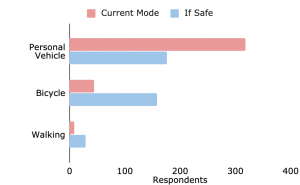 Richard Mehlinger is the Chair of Sunnyvale’s Bicycle and Pedestrian Advisory Commission. This article represents his views only.

Op-Ed Opinion
Author Ed GarciaPosted on February 14, 2018
I met my future wife on January 23, 1954 at the Zenda Ballroom in Los Angeles.  I was stationed in San Diego with the...

Op-Ed
Author Robert HaughPosted on January 8, 2014
While the 49ers Faithful have been on their feet rooting for the red and gold, including the final game at Candlestick Park, behind-the-scenes the...

Op-Ed Opinion
Author Dominic CasertaPosted on January 3, 2018
Every year I think about how to teach redistricting and gerrymandering to my seniors at Santa Clara High School.  It can be boring and...
SPONSORED