Sunnyvale is moving forward with its Vision Zero Plan, a set of policies designed to make the city streets safer for pedestrians and bicyclists, but critics say it’s not doing enough.

“Of course I support it, but I worry that it’s going to slow down the progress with that change,” said Smith.

The change Smith is talking about has to do with the rewording of Guiding Principle 3 of the Vision Zero Plan. The original wording included the phrase “safety takes priority over efficiency” but Vice Mayor Russ Melton proposed that the phrase be rewritten to say, “Safety is a primary consideration in the development of transportation projects for all users.”

“I feel like my colleagues made it ‘Vision However Many Cars There Are in Sunnyvale’ instead of Vision Zero,” said Smith. “I felt it was so weak in terms of protecting the safety of all cyclists that I didn’t vote for his changes.”

The Vision Zero Plan was adopted with the rewording in place.

Daniel Howard, a member of the city’s Planning Commission and a strong proponent of the Vision Zero Plan, wasn’t happy with the rewording or some of the other decisions the City Council made.

“It was frustrating for Vision Zero advocates to hear members of the Council spend a lot of effort trying to explain that Vision Zero needs to include a lot of education and passing out bike helmets,” said Howard. “To my understanding, Vision Zero is intended to make the infrastructure of our streets safe for everyone, in part by guiding people to safe behavior by design.”

During the public comment period of the July 30 City Council meeting, Howard along with a few other members of the community advocated for a “quick build” approach to be added to the Vision Zero Plan. Quick build is a process where cities will build a prototype of their safety measures in one small area before they roll it out to the city as a whole.

Howard says during the meeting, city staff argued quick build projects take a lot of staff time and the city must ensure they’re done safely. Ultimately, quick build was not added to the Vision Zero Plan.

But the city says it is doing more than just Vision Zero to help make streets safe for pedestrians and bicycles.

The Department of Public Works Transportation and Traffic Division is working on a Roadway Safety Plan that will identify areas in need of attention and develop potential safety improvements.

It is also working on the Active Transportation Plan, which will combine the current Bicycle Plan, Pedestrian Safety and Circulation Plan, and the Safe Routes to School Plan into one document.

“The plan will help the City strategically invest in programs and identify projects that will improve connectivity and continuity to the existing bicycle, pedestrian and Safe Routes to School networks within the city and with neighboring jurisdictions, with the goal of improving safety and access for all road users,” said Assistant City Manager Teri Silva via email.

Recent accidents along Sunnyvale’s High Injury Network — roads identified by the city where the most injuries occur — have brought even more attention to the problem. 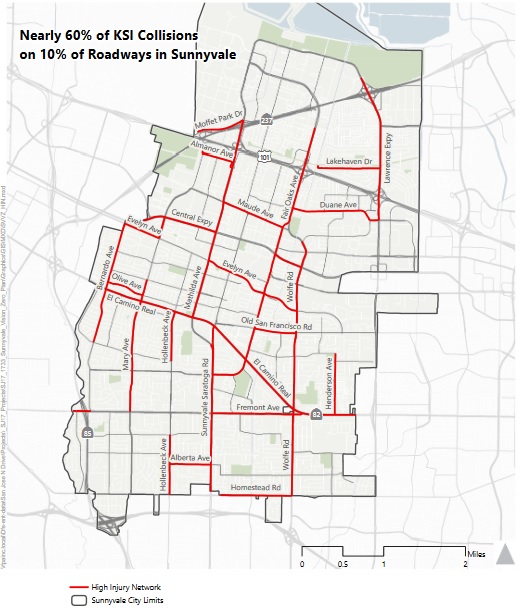 On July 23, a 13-year-old on a bicycle suffered minor injuries when she was hit by a car near the intersection of Remington Drive and Sunnyvale-Saratoga Road. That same day, a 15-year-old was injured on Fremont Avenue near Highway 85.

Smith is hopeful that more can be done in the future.

“I think that the plan and the staff’s intention are to keep this as a working document so my hope is that the changes won’t slow down measures to improve safety for bicyclists and pedestrians,” said Smith.