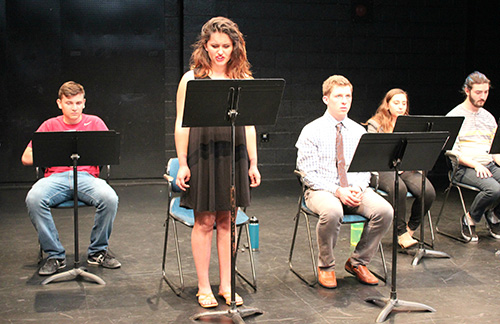 “When adversity strikes you down, you get back up and tell adversity to hit the road,” said a charismatic CEO of a multi-level marketing company who gleefully divulged how the company emerged victorious after countersuing the family of a victim who died using their product. This “conference of champions” where the CEO spoke was the opening scene in the reading of the play “Have I Got a Deal for You,” shown on June 4 at the Fess Parker Studio Theatre at Santa Clara University. The play was written by Thomas Ariniello, a student playwright. The New Playwrights Festival ran from June 4 to June 6. There were no assigned themes so students could compose the story of their choice.

“My playwriting students–either in beginning or advanced playwriting–write one acts that are then given a stage reading that is student acted and student directed,” said Brian Thorstenson, faculty advisor for the New Playwrights Festival. “There are six plays this year–two each night. My job is just to encourage them to explore what they want to explore. This is the 12th year that the Department of Theatre and Dance at Santa Clara University has done this playwright reading.”

“What I hope people take away from my play is that what someone in power says is not necessarily true and to be wary of people that have hidden agendas,” said Ariniello, a junior who is double majoring in marketing and theatre.

Other scenes in “Have I Got a Deal for You” illustrating hidden agendas included a teacher at a religious school likening the female body to a commodity (“Having premarital sex would make you used goods”), white collar executives tossing around ideas to create a program to flaunt corporate social responsibility (“We just have to seem genuine, we don’t have to be genuine”) and the president preparing to announce a military draft for the purpose of invading a non-specific country (“Do not mention oil”).

The second play showing on June 4 was “If It Had Been You,” written by student playwright Madeline White. The script, which offered occasional phrases in Spanish, followed a teen named Andrea whose father had just been deported. Things went from bad to worse for Andrea when she lost her sports scholarship to attend U.C. Riverside because of complications from a medical condition. Andrea’s angst peaked when she found out that the father of a boy she had a crush on was the ICE (Immigration and Customs Enforcement) agent who got her father deported.

“The inspiration for this story came from my hometown in Greenfield, California–it’s near Salinas,” said White, a sophomore who is majoring in Spanish and minoring in theatre. “Basically this area is predominantly Chicano and I wanted to write about the people from this area in particular, especially with the increase of immigration raids. I feel a lot of the bigotry surrounding these raids come from ignorance and I decided to put a human face on this situation.”

Adventures To Go Caters to Santa Clarans of a Certain Age