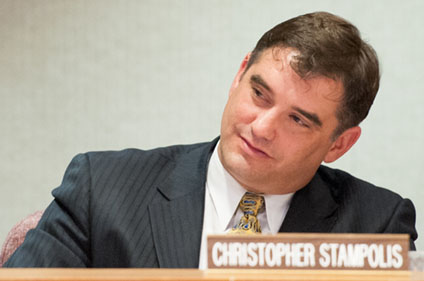 “Last night, after leaving a private meeting, I was in a high speed chase with a Dodge caravan,” Elamad said at the June 13 board meeting. “The person that owns this car is Chris Stampolis,” he said, noting that he saw the license plate and reported it.

“I have no idea what you’re talking about,” replied Stampolis. “I was near Calabazas and Monroe…That is true…You are absolutely welcome to check any facts.” The WEEKLY has confirmed that a police report was filed about the incident.

This isn’t Stampolis’ first brush with the law.

In 2005 he was arrested for threatening the manager of a Los Angeles storage unit company in a dispute over whether Stampolis, then President of the California Democratic Council, was properly authorized to open the organization’s storage unit. After the LA City Attorney decided not to prosecute, the storage unit manager filed a civil suit and was awarded $35,000 in compensatory damages.

In 2006 the Santa Clara District Attorney charged Stampolis with campaign reporting violations during the 2002 Santa Clara mayoral race. However, the judge dismissed the case.

The History of Santa Clara University in a Nutshell