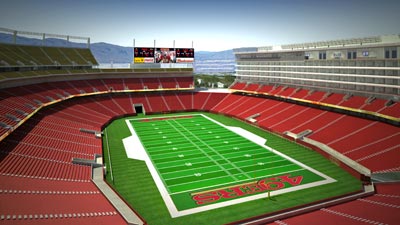 A year ago Santa Clara residents voted “yes” on a proposal to move forward with a plan for a 49ers football stadium in Santa Clara. If anything is surprising a year later, it’s how little has changed in the year since city voters passed Measure J – despite the San Jose Mercury News’ need for dramatic news copy.

First off, even stadium critic Roger Noll dismisses the NFL lockout as a factor in the project’s probable success. Even if the entire 2011-2012 season is called off, that would hardly be a factor in 2015, when the proposed stadium is expected to open.

So that leaves a rising price tag and what the Mercury calls a “cloudy” financing picture.

The price tag has gone up since voters went to the polls a year ago. Here’s what the 2009 term sheet that was voted on said:

“Based on current projections, Stadium development costs will be in the range of Nine Hundred Million Dollars ($900,000,000) assuming construction starts in 2012, and is completed in 2014. This cost projection will change as the Stadium design process moves forward.”

Since that was written, the stadium construction estimate has grown to $950 million. In addition, $37 million of city improvements – a new parking structure and moving an electrical substation, both were projects already planned – were added to the overall stadium project, raising the estimated cost to $987 million.

That’s still less than the Minnesota Vikings’ $1.05 billion stadium proposal, and well under the $1.6 billion price tag for New Jersey’s Meadowlands Stadium, which is shared by the two NFL teams, the Jets and Giants, both of New York City. Meadowlands was financed jointly by the two teams, with $300 million from the NFL.

The Santa Clara proposal puts the 49ers on the hook for construction cost overruns, reiterated in the City Manager’s report of May 31, 2011: “As provided in the Term Sheet and Measure J, Stadco [49ers business entity] is required to commit to pay any cost overruns incurred in construction.”

Further, the City’s operating fund contributions to the stadium are capped, as per the 2009 term sheet, at:

But what about the financing? Isn’t city financing thrown into question as the state legislature moves – albeit slowly – on the proposal to shut down the state’s redevelopment agencies?

The fact is that – despite the hysteria that has greeted this proposal – beyond closing the existing RDAs, it doesn’t affect other existing powers that municipalities have to initiate economic and capital improvement projects and issue bonds.

By contrast, the proposed Minnesota Vikings stadium project includes a $650 million direct commitment by Ramsey County and the state of Minnesota – part of which would be funded by a proposed countywide sales tax increase.

The latest agreement between Santa Clara and the 49ers offers further financial cushion for the City than was specified in the term sheet.

The 49ers will advance the stadium authority a loan that will be repaid out of Stadium Authority revenue from non-NFL events and the 49ers annual facility rent – which now will be based on covering all the SA’s expenses, rather than fixed at $5 million. Responsibility to repay this loan lies entirely with the SA – the City and the RDA have no obligation.

Lease terms also give city substantially more room to maneuver if stadium revenues are less than anticipated. The 49ers will lease and operate the Stadium during the six months of the football season – instead of only on game days as originally discussed. Further, the 49ers’ lease will be on a “triple net” basis – meaning that the tenant, not the City, must pay all operating expenses.

One explanation for these changes is the possibility of a two-team stadium, shared by the 49ers and, as has been suggested more than once in the last few years, the Oakland Raiders.

“It would not be at all surprising to see the NFL basically tell the two teams that they need to team up on a new stadium if they want NFL money through a future G3 fund,” wrote NinersNation.com blogger David Fucillo last month.

The real uncertainty in this picture is the NFL’s contribution to the project. Initially the deal included $493 in NFL financing, but now that’s an unknown.

The NFL used to have a financing stadium-financing program,G3, which was funded by broadcasting income. That fund is exhausted and so far, there is no information about what will replace it. NFL commissioner Roger Goodell said last month that the NFL would contribute to Minnesota Vikings stadium project, but gave no details.

For more information about the proposed 49ers stadium, visit santaclaraca.gov/index.aspx?page=1197. Robert Haugh contributed to this story. Carolyn Schuk can be reached at cschuk@earthlink.net.