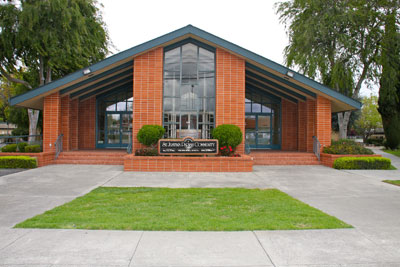 From its auspicious beginnings in a stable sixty-one years ago, Saint Justin Parish has been a noteworthy part of the City of Santa Clara. The parish consists of the beautiful church, the well-known school, the converted convent that houses the Parish Ministry Center, and the Thrift Shop. It is located at 2655 Homestead Road, Santa Clara.

“The program I am most proud of is the Community Ministry,” says Mrs. Dorothy Carlson, Minister of Parish Life. Pastoral Associate Joe Bauer oversees the program, which, when the Food Pantry part of it began years ago, fed about 50 people per month, according to Carlson. “Now we feed about 3,000 people a month,” she adds.

“What I am most proud of is the people in the parish,” emphasizes Carlson. “There are about 1400 registered families who are parishioners, and they are generous with food donations, and do the work. The parishioners decided years ago that volunteerism in the community is an important part of who they are.”

The fact that most of the money need for the actual buildings to be reconstructed was donated mostly by the parish community is a testament to their dedication. The church’s renovation began in 1995, and the school’s refurbishing was initiated in 1999.

mong the improvements were stain-glassed windows, designed by Roger Hogan Studios. Most recently the parish was nominated by the city’s Neighborhood Solar Project as one of the seven organizations to possibly receive solar paneling. Residents who donated to the Solar Project are eligible to vote for the organization(s) that is chosen to receive the solar panels. This is a way to help St. Justin’s afford the charitable work for which they are known.

St. Justin’s School consists of Grades K-8, with a preschool that began just this year.

“The school enrollment is about 300 children,” says Pastoral Associate Joe Bauer. “The school is involved in everything we do,” he states. “The school children collect food for us, and during the Nine Day Novena, collect different items for those in need each day, e.g. warm jackets, baby clothes, blankets and sleeping bags, etc.”

“The Thrift Store resells donated used clothing and household items to support the school financially. Parents are required to work there a certain number of times a year,” remarks Bauer.

“We offer bi-monthly senior meals, holiday feasts, and are open daily, as a center for Second Harvest Food Bank. Some of the grades sponsor the senior meals,” explains Bauer. “Local Scout Troops are connected to senior dinners and plan them, decorate, and perform other contributions.”

“The City of Santa Clara has been very generous and supportive with grant money for these projects,” says Mrs. Dorothy Carlson, Minister of Parish Life. The school and all the departments report to Mrs. Carlson, and she is the only woman in the Dioceses who holds this position. “There are very few parishes where people would be this accepting of a woman in this role,” she remarks.

“We work with many groups throughout Santa Clara,” offers Pastoral Associate Joe Bauer. “Among them are the Santa Clara Lion’s Club, the Santa Clara Firefighters Foundation, and the Italian service group UNICO, “he concludes.

“TOPS (Take Off Pounds Sensibly) and AA (Alcoholics Anonymous) are two of the other groups that meet here,” adds Carlson.

This is just a small sample of how the Saint Justin’s Parish Community makes a big difference. There are numerous other ministries within the church community.

“It is hard for us to separate ourselves as a church from how we are as part of the community. We really are intertwined.”