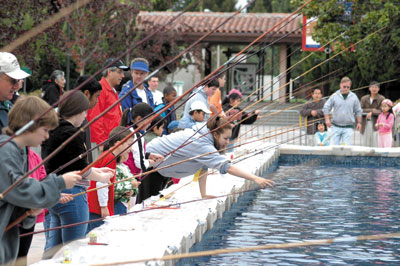 The warm weather was welcomed by anyone who found themselves outside before sunrise on April 21. Any April morning before sunrise can seem chilly, and standing in a line waiting for something to happen can try even the most patient people. “I normally don’t like to get up so early but my mom told me about this and I know I’m going to have fun,” said 9-year-old Brian from Gilroy.

Fun is what Brian and several hundred other children, ranging in age from 3 to 12, had in store. “We planned on waking the kids around 4:30 this morning, but as soon as Brian heard us getting breakfast ready, he came out of his room to let us know he was ready to go,” explained Brian’s mom, Judy. “We used to live in Santa Clara and we weren’t able to come to this before so we’re really glad for it. Our normal Saturday morning includes sleeping in [until about 8], followed by Saturday morning cartoons.”

The event that got them and others up early on a Saturday morning and caused the ratings for early morning cartoons to drop like ice being dropped into water was the annual Kiwanis Fish Derby held in the reflection pool outside Santa Clara City Hall. The annual tradition dating back many years is one event that even bleary-eyed parents look forward too. “It’s amazing to see all the children here so excited. When I first told our 10-year-old son, Max, about getting up at 5:30 in the morning, he wasn’t exactly excited,” said Dale of Santa Clara, “but he caught his very first fish today. I didn’t do that until I was into my teens so now he’ll always have something that he did before his old man.”

Excited, thrilled, enthusiastic, and fascinated described the young and possibly soon-to-be fishing enthusiasts. From children who have participated for years and were practically old hands at fishing, to those like Max, who caught his very first fish.

As in past years, about nine tons of ice were added to the fountain on Friday afternoon to lower the temperature of the water to a cool 55 degrees so the more than 1,000 8-10 inch Rainbow Trout would be welcomed to their new, albeit temporary home. Any fish that weren’t caught by the end of the event were donated to a Salvation Army meal program. The Fishing Derby is a time-honored tradition in Santa Clara and has been put on by the Santa Clara Kiwanis Club for almost 30 years. But an event like this requires the help of dozens of volunteers and was made possible with support from the City of Santa Clara, the Santa Clara Elks Club, the Santa Clara Lions Club, Mission City Community Fund, Santa Clara PAL, and Mel Cotton’s Sporting Goods.