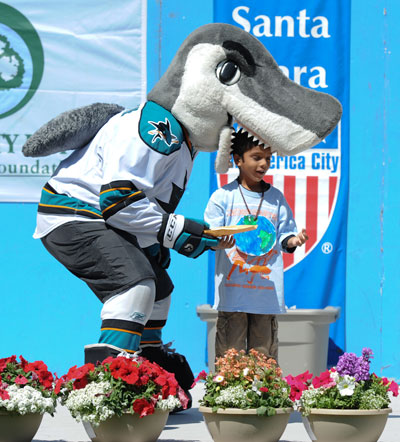 A city as old as Santa Clara is steeped with traditions – some dating back over 100 years. One of the newer traditions – a mere 24-years-old, is the City of Santa Clara’s Arbor Day/Earth Day celebration. Combining the two into one event makes perfect sense, since it’s a chance to help educate children about the importance of trees. It also gives the city officials a chance to bask in the sunlight of recognition.

On Friday, April 27, the National Arbor Day Foundation presented city officials with Santa Clara’s 24th Tree City USA award flag. Presented by California Department of Forestry & Fire Protection Battalion Chief Darrel Wolfe, the award recognizes the City for its successful tree care program. On hand to accept the award for the city were Mayor Jamie Matthews, Vice Mayor Lisa Gillmor, City Manager Jennifer Sparacino and retired City Arborist John Mendoza. According to Mayor Matthews, We had to have John come back out of retirement to help receive this award since so much of the City’s tree program is because of his hard work and dedication.

On hand to help celebrate were close to 1,000 students from Don Callejon, Pomeroy, St. Clare and Scott Lane elementary schools. The students sang songs, including Under a Shady Tree, The Parts of a Tree, The Tree, Everything Grows, Sun, Soil, Water and Air, and read poems including I Love Trees, Ode to a Tree, and Trees are my Heroes. But before the day’s events got underway, the students and the adult volunteers were amazed and entertained by the magic of Magician Extraordinaire Phil Ackerly and the comedic antics of Daffy Dave, the strolling entertainer. For the musically inclined, or just curious about the interesting gentleman singing, strumming a guitar, playing the harmonica and tambourines attached to the bottom of his shoes, Santa Clara’s own Blues musician Ike Cosse wowed the children, some of whom had never heard of Ike or seen so many instruments played at one time before. The list of dignitaries included Melissa Bowling, Miss Santa Clara 2010, who sang America the Beautiful as well as Jessa Carmack, Miss California’s Outstanding Teen 2011 and Ashley Wong, Miss Santa Clara’s Outstanding Teen 2012. Jessa and Ashley signed autographs for the students and joined by Melissa, led the crowd in the Pledge of Allegiance. Once on-stage, Ackerly and Dave each succeeded in their chance to amuse and enthrall the crowd.

Even though Master of Ceremonies Phil Ackerly surprised the kids over and over again with his magic tricks and Daffy Dave kept them laughing with his silliness and juggling, clearly the biggest surprise for the students was the appearance of SJ Sharkie, from the San Jose Sharks. Unbeknownst to the students, Sharkie looked over the demonstrations in the parking lot before going on stage and even went for a ride in a bucket truck so he could oversee the events from about 60 feet in the air.

Feed Hungry Americans While Getting Your Mail