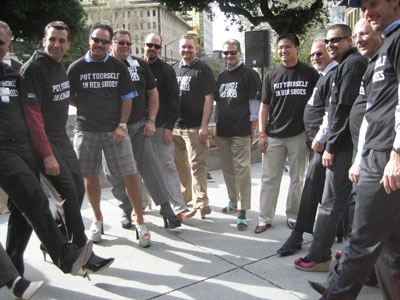 April is Sexual Assault Awareness month, and on April 18, a crowd of hairy-legged men, many with rolled up pant legs, squeezed their big feet into women’s spiked heel shoes and teetered off from Plaza de Caesar Chavez in downtown San Jose on the 10th annual YWCA Silicon Valley “Walk a Mile in Her Shoes” event to bring attention to sexual assault.

The men were moaning about their feet before the walk even began.

“These things were made by the Marquis de Sade,” says Santa Claran Charles Sedlacek, walking for his sixth year. “I asked for sensible pumps, and I got this open-toed, strappy number.” The YWCA has more than 500 pairs of mostly donated high heels in guys’ sizes.

“I love the cause—to help support the Y Rape Crisis Center,” says Sedlacek. “A lot of my co-workers at Lockheed Martin are here, too.” Sedlacek’s son and daughter-in-law, Steven and Lisa Barker, brought their Chihuahua, Ralph, wearing a shirt Lisa made him for the walk.

“This raises my awareness of how women torture themselves for beauty,” says San Jose State University student Richard Hernal, part of a team from Alpha Phi Omega, a co-ed community service fraternity.

“Every year I go higher and higher,” says fourth-year walker Ernie Japec, standing tall on his high stacked heels. “Next year I’ll be on stilts.” Japec walked with colleagues from Santa Clara and San Jose Kaiser Permanente, one of the event sponsors, along with Silicon Valley Business Journal and Marvell.

“The issue of sexual assault and violence is very important to the DA’s office. It’s important to combat this and raise awareness…to change attitudes and behavior. The YWCA is a real leader in this field,” says Rosen.

“This is an exciting way for us to bring attention to a very serious community issue in a light-hearted way. The men enjoy coming out here, and they return every year,” says YWCA Silicon Valley CEO Keri McLain, a former Santa Clara City Councilmember.

The reported statistics of sexual assault and rape are alarming. According to the 2010 National Intimate Partner and Sexual Violence Survey, nearly 1 in 2 women (44.6%) and 1 in 5 men (22.2%) in the U.S. experience sexual violence other than rape at some point in their lives. Nearly 1 in 5 women and 1 in 71 men have been raped.

The YWCA Silicon Valley services all of Santa Clara County except Gilroy and Morgan Hill, and McLain says that 350 sexual assault victims were reported in the county in 2011. Twenty-five percent were children under 12. The crisis hot line received 1,108 calls, about ten percent from the city of Santa Clara.

One in four college students will be a victim of rape or attempted rape. San Jose State University student Jennifer Elias was an assault victim two years ago when her drink was drugged.

“Believe victims and encourage them to talk to someone,” says Elias bravely to the crowd. “No matter what they’re wearing or how much they’ve had to drink, rape is never okay, and no one ever asks for it.”

The YWCA Silicon Valley (www.ywca-sv.org) has a 24-hour rape hotline and provides victims with free counseling, legal counsel, and advocacy. The 2012 walk has already brought in $40,000 to benefit the rape crisis center, with additional contributions anticipated.

“Don’t twist your ankles! But we have Kaiser here if you do,” says District Attorney Rosen just before the crowd teetered out of the plaza en masse.