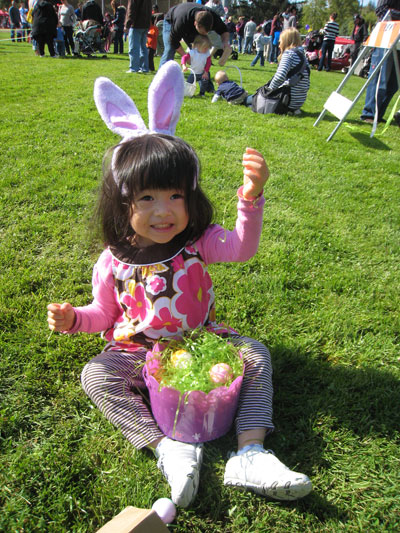 On April 7, the children of Santa Clara put on their bunny ears and got their baskets ready as they trickled onto the big field at Central Park for the annual Santa Clara Easter Egg Hunt. Parents led their children to the designated patch for their age group. There was also a patch specifically for special needs children. The eager youngsters watched as volunteers scattered bags of plastic eggs filled with candy and toys all over the lawn.

For Tanya Quillinan, this was the first city egg hunt she has ever attended with her family. Quillinan was excited to see her daughter Michela, who is almost two years-old, participate in this local event.

“I think this is fun,” Quillinan says. “I like how Santa Clara is putting together something like this for the kids.”

Some children tried to cross the green tape before the hunt began and were gently told to stay back. At 10:00 a.m. sharp, children and their parents crossed the tape and made their way to the eggs. Excited squeals sounded through the park as children scooped up eggs and dropped them into their baskets. Parents stood close by and took pictures and videos as their children raced to snatch the last egg.

In a few minutes, it was over. Some of the children sat on the grass to count their eggs and uncover the treats inside them.

Casey Moore volunteered at the egg hunt through the South Bay Church. She was told that an estimated 2,000 people would show up today. So the team of volunteers from various organizations who helped put this event together had a lot of work to do.

“We were told to come this morning and help where it was needed,” Moore says. “We did set up, we put up the tape and balloons, and we spread out eggs all over the field. And we acted as field marshals to hold kids back [if they tried to cross the tape before they were supposed to.]”

The hard work of the volunteers and city staffers paid off. Children left the park with bright smiles and baskets brimming with eggs.

“The Easter egg hunt is supposed to be a fun activity for families,” Moore says. “Here, kids get to run and win prizes, and collect the toys and candy in the eggs. Also, it’s good to get people out so they could spend time with their community.”