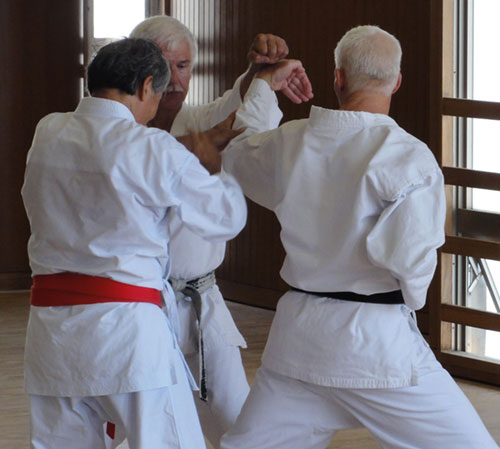 Mastering martial arts is a never-ending, learning journey of body, mind, and spirit. Many spend decades striving for improvement and studying under the masters, as martial arts continues to evolve and wisdom gets passed on from instructor to student.

One particular form of karate, Shotokan, is taught at the Santa Clara Adult Education Center. Under the tutelage of Wayne Krill, head instructor at Shotokan West Karate and an active participant in Shotokan for over 25 years, students have the opportunity to learn this Okinawan martial art.

“Shotokan is the modern mainland Japanese version [of karate], developed for their different from Okinawan culture by Gichin Funakoshi, an Okinawan scholar/teacher,” says Krill. “Shotokan became one of the most widely practiced forms of karate after World War II, and differs in that fighting is done at a greater distance from the opponent. It now has developed into competitive forms, beyond the traditional that Okinawans practice.”

Krill constantly tries to enhance the student experience. He was able to take his training to the next level when he had the opportunity to travel to Japan and study under the reigning Okinawan masters in October 2012.

“In Okinawa, I expected the physical training to be intense, but found so much more,” says Krill. “Training with eighth, ninth, and 10th degree black belt masters in five days, and in five karate styles, was certainly intense. But, in small classes, among 14 highly accomplished black belt colleagues, each of the Okinawan masters gave details of the evolution of their style and lifelong wisdom in making karate effective.

“I learned many new techniques and perspectives on what makes for effective karate,” continues Krill. “My objectives for the trip were to understand the basis and history for why Shotokan karate evolved and is performed as it is, and to be able to bring this back to students such that they could both share the excitement of their karate roots and to accelerate their effectiveness as practitioners. I’ve been teaching these basics for the last few months to a small group who truly are excited by what they are learning.”

Because of Krill’s experience in Japan, he can now offer the experience to students who “share the excitement for karate’s traditions, effectiveness, and learning the ‘way.'”

Krill has run Shotokan West Karate out of the San Clara Adult Education Center for nearly eight years. He supplements his classes with jujitsu, aikido, and Okinawan karate forms. “I work and train with several karate black belts as well as junior students, all who bring unique perspective and applications which make the classes for all students a very rich learning experience,” he adds.

Chuckles for a Cause