Another round of storms struck the Bay Area over the weekend, causing creeks to swell in Santa Clara and Sunnyvale.

San Tomas Aquino Creek overflowed its banks near Levi’s Stadium. About an inch of mud covered the walkway under Tasman Drive Monday morning.

While it was mostly clear skies during Saturday’s San Francisco 49ers vs. Seattle Seahawks game, the weather affected some of the festivities. Santa Clara Police Department (SCPD) reported that the flyover at the game was canceled because of the weather.

Meanwhile, in Sunnyvale, the rain overwhelmed some drainage systems. Portions of the roadway in the Fair Oaks/Tasman area flooded, making it dangerous for cars to drive through. Sunnyvale Department of Public Safety also issued a warning as the water levels at Calabazas Creek rose.

When the skies cleared on Monday, crews in Sunnyvale worked to make sure the roadways drained.

According to Weather Underground, Santa Clara/Sunnyvale/San Jose received close to 1.5 inches of rain between Friday, Jan. 13 and Monday, Jan. 16.

The real problem was that it was just the final storm after a series of storms that overwhelmed local waterways.

The good news is, while California is not clear of the drought yet, the recent series of storms has helped.

Santa Clara Valley Water reports that many of the Bay Area reservoirs are at 100% capacity. Lexington Reservoir spilled over of the first time since 2019 over the weekend.

Meanwhile, the Sierra snowpack is 251% above average for this time of year statewide. The snowpack is one of the key sources of the state’s water supply.

Forecasters say the rest of January is expected to be drier. That will allow for cleanup and give areas like the Santa Cruz Mountains time to dry out.

While it’s too early to be certain, forecasters say a new round of storms could strike in February. 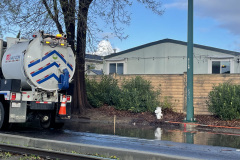 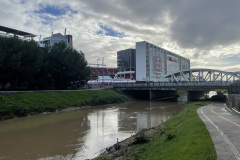 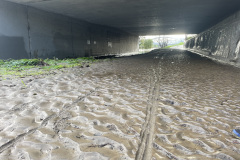 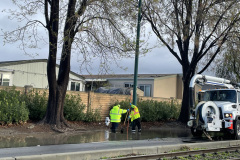 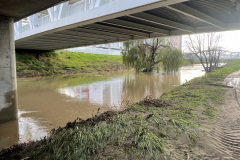