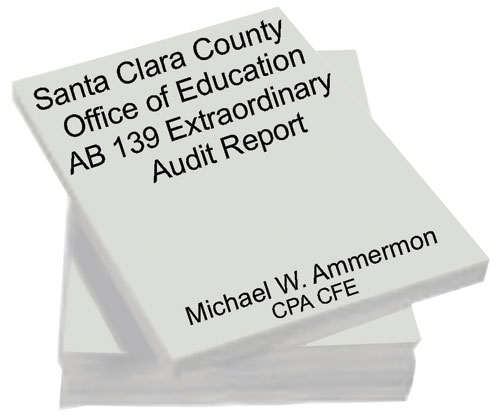 However, the auditors report also reveals that the processes in question were longstanding in the county.

For 20 years Dorothy Diekmenn, Los Gatos-Saratoga Joint Union High School District business and operations director – now retired – did the agencies’ accounting, with the payment being made to the district, Luyau told the auditor.

The agencies “did not report to the county for budget or closing” and “paid her directly,” with the district given some payment for the use of its systems.” After Luyau took over the accounting from Diekmenn, he “followed how Dorothy handled [it] by paying he [sic] and Kimberly directly.”

The County Superintendent of Education, Xavier De la Torre, has 45 days from the report date to determine if fraud took place or money was misappropriated. If he finds that indeed there was fraud, he’s required by law to notify the State Controller, the Superintendent of Public Instruction and the Santa Clara district attorney.

The September 25 report alleges that staff “misrepresented payments they personally received as payments to the SCUSD,” “signed contracts on behalf of SCUSD that they personally benefited from,” provided accounting services to two agencies as independent contractors while on duty as SCUSD employees, and “knowingly altered … reports they prepared” for these agencies.

SCUSD has agreements with the South Bay Area Schools Insurance (SBASI) and Silicon Valley [school] Transportation (SVT) agencies to provide bookkeeping services. Luyau signed these agreements. The five employees were then paid as independent contractors for the services, and the records were altered to make these checks appear to have been paid by the agencies to SCUSD. The auditor reported that transactions to these payees were the only ones altered in this way.

The payment records were changed, Nguyen told the auditor, “so the board can see this is for the accounting service.”

Further, the auditor’s analysis showed that 90 percent of the agencies’ financial transactions were posted during SCUSD normal business hours. “As independent contractors, the work performed should have been provided outside their regular work day,” says the report.

The audit covers school years 2008-09, 2009-10, and 2010-11 – the report didn’t examine prior years. Then-Superintendent Steve Stavis told the auditor that, “he was unaware of the accounting contract …or any other arrangement between the district and Jim Luyau and Kimberly Nguyen for the payments for accounting.”

The report was delivered to the district at about the same time it was apparently delivered to KTVU’s investigative unit – also the same day as a highly publicized school board candidates forum. Although the report wasn’t available on the SCCOE’s or the SCUSD’s website, one candidate, Christopher Stampolis, referenced the audit several times in his remarks Thursday evening. Stampolis is married to SCCOE board member Anna Song.

The report is on the agenda for the October 11 school board meeting and the district says it will provide more information at that meeting, which will be held at the District Office Board Room, 1889 Lawrence Road in Santa Clara (just north of El Camino at Lawrence Expressway). The meeting starts at 6:30 p.m..