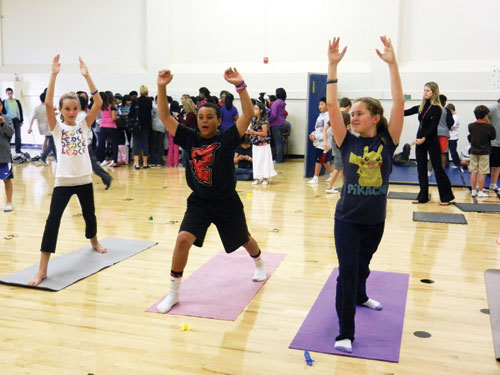 Fitness, food, and fun were encompassed in the third annual Health and Wellness Fair at Peterson Middle School on October 11.

“Today we are hosting our third annual Health and Wellness Fair,” said Peterson Principal Susan Harris. “And this year is a little different because we’re adding the world wellness so we’re really not just promoting healthy eating and healthy living but we’re really promoting the wellness and the well-being of each person on the inside as well as the outside.

Students were able to participate in a Jeopardy-style game hosted by Kaiser Permanente doctors, yoga class, and pedometer jiggle, where a pedometer was strapped to the students’ arms and they wiggled and jiggled for 60 seconds to see how many “steps” they could take. Additionally, students were treated to barbecue corn on the cob, marinated bell peppers and onions, and sweets made with natural sweeteners like honey and fig paste.

‘Every year we have a different focus, and this year it’s on reducing sugar intake,” said Nancy Fohner, a seventh grade science teacher at the school. “Also, [students are focusing on] helping the environment through reducing their use of plastics…They did a survey and something like 567 students had no idea where plastic comes from…We think there’s a big gap because plastic is a petroleum product and it’s non-renewable. We are focusing on two things – one is what does a 100 calorie snack look like and the other is to rethink their drink. I think they were surprised to see that things like Gatorade have enormous amounts of sugar.”

Students were encouraged to fill out D.O.T. (do one thing) forms as pledges to adhere to a healthy lifestyle after the fair. Many pledged to eat more fruits or refrain from sugar for 21 days, the amount of time it takes to break or create a habit.

“My favorite thing to do was guessing the different substances – like guessing what was corn syrup, what was honey, what was an artificial sweetener,” said eighth grader Tamara Pantic. “I got six out of eight or nine right and it was one of the highest scores so that was pretty cool….I also tried some barbecue corn, which I hadn’t tried before and it was pretty good….I learned how much sugar is in the things you eat every day and how artificial sweeteners aren’t so good for you.”

In addition to learning the dangers of plastic and sugar, students were taught how to grow gardens at home and create composts.

“I like the health fair because it’s a fun way to teach people about being healthy – mentally and physically,” said Pantic. “If you just sit everyone in a room and say you need to get healthy or you’re going to get fat and lazy and it’s going to hurt you – you’re going to get more diseases, most kids aren’t going to listen to you. They’re going to let their attention wander. But if you teach them through games or have them guess things and then they win a prize, and it’s a healthy prize, I think more kids are going to listen.”