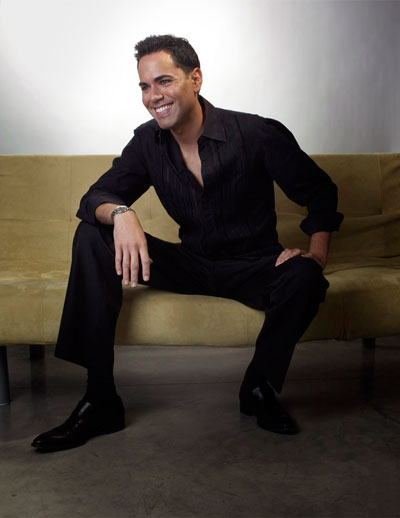 “My dad told me to set out and take a piece of the world with you and that’s what I’m trying to do,” said Borba whose interest in skincare came when he was working for some of the world’s major cosmetics companies and dealing with his own cystic acne problem. “I was creating products that were hugely successful, but I wasn’t working on myself.” He was also dealing with a weight issue. “I was close to 240 pounds and had cystic acne…I wanted to change myself.” He worked on reducing his weight, but still had acne problems when he was signed by Q, a prestigious modeling company in San Francisco and then received a contract from Ford Models. “I felt so bad for the makeup artists,” said Borba. “I spent more time in the makeup chair [having them cover my acne] than I did modeling.”

From his own research and in talking with some of the top dermatologists and endocrinologists in the country, Borba knew 90 percent of skin problems started internally. “When I started e.l.f., I flew to Japan and the Asian and Japanese culture turned me on to the idea of internal beauty,” said Borba.

Upon returning, Borba went on a mission to develop something that would cure skin conditions from the inside out. He knew which ingredients worked best for each skin ailment and reverse engineered the rest. What he came up with was a line of vitamins, waters, serums and creams to help people solve their skin dilemmas.

He tirelessly pitched his product and educated the nation on the necessity for his line. After seven years he believes it is finally taking hold. “I’m not about the falsification and overall blatant usage of camouflage…I want to help people solve their challenges so they can be comfortable in their own skin.”

Borba is a licensed aesthetician and practices at a small office inside the company’s Los Angeles headquarters. His client list is full of celebrities, but when launching a new treatment like his $7,000 HD Diamond and Ruby Peel he looks to his fans for feedback. “It’s so great,” said Borba. “It’s like a big family and I think they really appreciate it.”

The Borba companies are extremely charitable to Covenant House California, a non-profit whose mission is to reach at-risk homeless youth and offer them opportunities to turn their lives around. Borba is the organization’s global ambassador. “I feel like I’ve been put on this earth to help bring people back to Catholic/Christian religions and help kids who have been kicked out of their house,” said Borba.

Even though Borba has a hectic schedule managing his businesses, writing, launching his singing and acting career and working for CHC, he has energy to spare and a positive attitude. He feels there’s nothing that can’t be done as long as you put in the effort. “You just have to really, really want something,” said Borba. “Map it out A to Z and you must be OK with hearing no and be willing to do the work. You must do the job of an army….everything is possible – it just depends on how much work you want to put into it.”

Currently he’s working on, as he calls it, “revolutionizing” the Borba anti-aging lines and his third book, which “takes one of the best chapters in the second book and expands on it…People expect me to come in and shake things up and I’m not afraid of that,” said Borba.

The Borba Nutraceuticals and Cosmaceutials lines are available locally at Walgreens. E.l.f. Cosmetics can be found at Target and Skintervention can be purchased through any major book outlet. For more information on Borba’s 200 plus skin products visit www.borba.com or visit www.eyeslipsface.com for information on e.l.f. Cosmetics.

Community
Author Press ReleasePosted on September 28, 2022
The 53rd Santa Clara Parade of Champions will hit the streets of Santa Clara on Oct. 1 at 11 a.m. But, don’t show up...

Community
Author Cynthia ChengPosted on September 27, 2022
On Sept. 10 at the Community Recreation Center was the City of Santa Clara’s State of the City and Community Awards, which recognized outstanding...