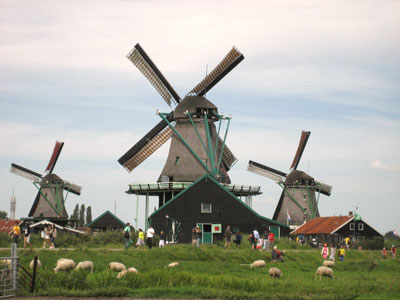 Visiting the Netherlands—or anywhere in Europe—is hardly a frugal adventure for Americans. The exchange rate averaged $1.44 per Euro in August. However, I was invited to join three friends for a three-week house and car exchange with a family from Breda, a Dutch town midway between Amsterdam and Brussels, Belgium, where we also toured. Thanks to the home exchange, our expenses once in Breda were just for fun, food, and fuel ($9/gallon).

The Netherlands, flat as a Dutch pancake, is the most bicycle-friendly country I’ve ever visited, and people of all ages and social positions use bicycles for transportation. Riding attire includes skirts and spike heels and suits and ties, but not even the children wear helmets.

The 16.5 million Dutch people own an estimated18 million bicycles. Instead of a car, the garage of the house where we stayed held seven bicycles that we were welcome to use but cautioned to always lock securely. Registered bicycle thefts countrywide totaled 515,000 in 2009, and Amsterdam is the bike theft capital of the world.

There is everything to like about a trip to the Netherlands, especially the people. Everyone we met was as tall, friendly, and forthright as my Dutch friend Elsbeth TeBrake, who lives in Los Altos, and her late husband Jurgen Annevelink, who always greeted me with three kisses on the cheek—right, left, right. (More than 1,000 Santa Clarans claim Dutch ancestry.)

As a country, the people of the Netherlands are the tallest in the world with the average height for men being 6 feet 1 inch. It’s a great country to shop for clothes if you are tall.

Whenever we got lost exploring towns, it was easy to ask directions because almost everyone speaks English well.

“Do you speak English?” my friend Sharon Madigan would ask.

“Sometimes!” We easily fell into conversation with people eager to converse with Americans and provide information about local sights, restaurants, and their last trip to the U.S.

Unlike in the U.S., when we ate out, it was never an inconvenience for servers to give us separate checks. After all, we were in the country where the expression “going Dutch” -meaning each person pays their own way—originated.

A drive of one to two hours got us to most tourist attractions: canal rides, bike rides, museums, UNESCO world heritage windmills, castles, old towns with markets and grand churches, a re-created historic Dutch village, and an outdoor re-creation of the Netherlands in Lilliputian miniature, including the heroic boy with his finger in a hole in a dike to save his town from flooding—a fictional tale written by an American woman in the 1800s.

If you visit the Netherlands April 5 through October 7, 2012, you can attend Floriade 2012 in Venlo. This World Horticultural Expo takes place just once every ten years (www.floriade.com). Now that would be a real Dutch treat.

Finally, a caveat for sun worshippers. The Netherlands has a maritime climate with cool summers. Even in August, most days we wore light jackets and kept our umbrellas handy.