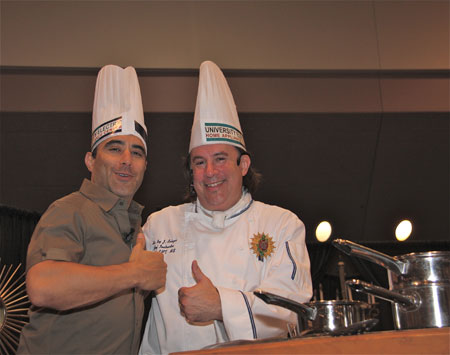 Ah, the elusive good life. It was there to sample at South Bay’s Art of Home Show September 9 through 11 at the Santa Clara Convention Center. An all-day lineup of fast-talking, wise-cracking yet knowledgeable presenters appeared on stage, shooting rapid-fire advice-bytes and jokes.

“This is a million dollar meal for free,” says chef Sir Roy Salazar, culinary project manager for University Electric, making pasta cocktails as in “Pass da cocktails” for his hungry audience. The sauce for his margarita pasta was made with margarita mix (honest) and unsweetened applesauce to give it texture, and the sauce for his Bloody Mary pasta was made with, well, you can guess.

Anthony Gilardi, host of the HDTV series “The Wine Guy Unplugged,” got talked into giving Sir Roy a hand.

“You can’t cook without a hat,” says Sir Roy.

When the Silicon Valley Wine Garden opened, the cameras started rolling as segments of Gilardi’s TV show were filmed, beginning with a wine and chocolate “dating game.” It featured Amista Vineyards wines from Healdsburg (www.amistavineyards.com) paired with handmade chocolates created to match the wines by Coco Tutti Confections (www.cocotutti.com).

Chocolate confectioner Elyce Zahn explained the “dating game” in which tasters match unidentified wines with chocolates on a blind date. Tasters decide which wine and chocolates are marriageable, which are just dates, and which should never go together.

In the “Reincarnitchen of your 9 X 10 Kitchen,” contractor Steven Katkowsky (www.stevenkatkowsky.com), who specializes in making the most of small spaces, pointed out ways to make a kitchen look larger—brighten it for starters—and make it hold more by, for example, utilizing air space in the walls between 2 X 4s.

“We’re going to start the presentation late,” says Katkowsky, author of Danger, Construction Zone: Your Guided Tour to a Successful Remodeling Project. “What? Did you expect a contractor to be on time?!”

Of course, the good life also includes outdoor living. Ornamental landscape designer and contractor Ahmed Hassan (ahmedhassan@comcast.net), host of DYI Network’s “Yard Crashers,” revealed “The Whole Truth about Landscaping”—well, part of the truth. Not even native Californian Hassan, who has been landscaping professionally since he was 15, can talk fast enough to reveal the whole truth in one-hour “edutainment” seminars.

If you want to landscape your yard, now is the time. Hassan suggests planning in the summer, installing in the fall, letting everything weather and heal through the winter—the normal dormant period. Then come spring, watch your garden flourish and enjoy it.

If Hassan were helping you improve your yard, he would ask: Who is going to maintain it? What functions do you use it for? What interesting elements do you want? Do you have sentimental items or plants? Are cut flowers or edible plants important?

But South Bay’s Art of Home Show offered more than engaging seminars. A host of home and yard improvement vendors were eager to share their services, products, and expertise one-on-one. First-time show vendors Chris and Carrie Sullivan from Gilroy’s family-run West Side Nursery (www.west-side-nursery.com) had a lush display of flowering trees—one of several beautiful show gardens. At least six dogs and cats were adopted out by Friends of San Martin Animal Shelter (www.fosmas.petfinder.org).

Yes, South Bay’s Art of Home Show had everything for the good life, including a thing or two Christy Kinney, for one, didn’t even know she needed but bought anyway.