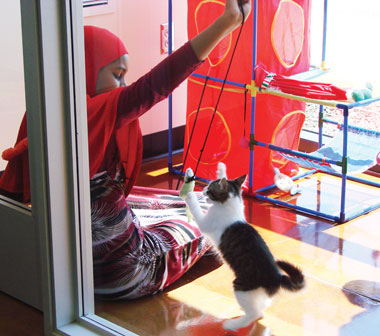 Companion animals have enlightened our lives, and in many cases, given us something to live for. There are incredible health benefits for owning an animal, and even though the majority of Americans are pet owners, there is still a pet overpopulation problem. Because of this, animal rescue organizations are constantly working to find ways to lure interested adopters to their facilities and entice them to adopt. One of the ways Silicon Valley Animal Control Authority does this is to hold an annual Adoptathon.

SVACA’s Aloha Adoptions event was held on Saturday, August 13 from 11 a.m. to 5 p.m. and there were plenty of cats, kittens, dogs, rabbits and even a bird to choose from. For the adoptathon, SVACA waived its usual adoption fees of $150 for dogs and kittens and $100 for cats and allowed potential adopters to set their own price.

Usually these events only include adult animals, but “[right now] we have an overabundance of kittens, so they’re included in the event” said Executive Director Dan Soszynski. At the time of the Adoptathon, SVACA had 40 cats and kittens and 12 dogs available. There were also about 30 cats and kittens in foster care, so the shelter was eager to place as many animals as possible.

There were many black cats at the shelter. This seems to be a trend among animal care facilities as black cats, and dogs, often get overlooked because of their color. Many people don’t see them as being as pretty as an orange tabby or are superstitious and are afraid of owning a black cat. “We are trying to convince people to look past color and breed and see the animal’s personality,” said Soszynski.

Some potential adopters, like Jennifer Brown and her boyfriend, John, came specifically for the black animals. Brown came for Maui, who will now be known as Maggie, a black Pit Bull and Labrador Retriever mix. Prior to the adoption, Brown had set up two separate visits with the dog, and was just waiting on landlord approval before adopting. Once receiving approval on Friday night, Brown was eager to get her new dog. She even had Maggie’s new collar and nametag with her. Brown’s boyfriend had been searching for a black cat to add to his kitty brood of two. One of his cats, Batman, is very playful and outgoing, while the other is more of a mellow lap cat. His goal was to find another playful, preferably adult, black cat to entertain Batman. He had an interest in Houdini, a black kitten, but by the time the couple got to the shelter, Houdini had been placed on hold. “That’s OK,” said Brown prior to her boyfriend’s arrival. “He will just be happy [the kitten] found a home.”

After the event was done, SVACA had found homes for 17 animals; one cat, 11 kittens, and five dogs including Steven, an extremely shy Miniature Pinscher mix who had been at the shelter since April. “[Steven] eventually came out of his shell due to the good work of our volunteers and staff,,” said Soszynski through an e-mail.

Despite such a good turnout, there are still plenty of animals who need homes and SVACA will continue to put in the effort to place all adoptable animals. Last month alone, SVACA had an 84% live release rate. For a government-run facility forced to take in all animals regardless of condition, this is an incredible feat that nears no-kill status. It’s also, according to Soszynski, a 21-22% increase over last year. “For us to be in the 80s, we’re really excited about that,” said Soszynski. While this may be an amazing improvement, the shelter is currently in the middle of kitten season and there are just as many animals leaving as there are coming into SVACA’s facility. “Unfortunately, we feel like we’re treading water a bit,” said Soszynski. “We took in nearly as many [companion animals this weekend] as left us.”

To find out more information on SVACA or to see its adoptable animals, go to www.SVACA.com or visit SVACA’s cageless facility at 3370 Thomas Road in Santa Clara.