It is a frightening email for a parent to receive; a note from your child’s school saying that there was a lockdown involving Santa Clara police. That’s just what happened to parents at Bowers Elementary School and Cabrillo Middle School on April 3 and parents want to know why it took hours for them to be notified.

“Our priority is to make sure that the students are safe,” said Andrew Lucia, Assistant Superintendent for the Santa Clara Unified School District (SCUSD). “That’s the first priority in any of our lockdowns. And then to communicate accurate information to parents as soon as possible after the safety of the students and staff is addressed.”

Around 11 a.m. on April 3, Santa Clara police called Cabrillo Middle School after receiving a call about a person with mental health issues that might hurt themselves.

“Our officers had Cabrillo and Bowers schools on lockdown until we were able to contact the person,” said Lieutenant Todd Cummins of the Santa Clara Police Department. “The lockdown lasted for less than five minutes at both schools. No one was hurt. No weapons were involved.”

Lucia says given the digital age that we live in, it was very important that the district send out accurate information to parents.

“As you know, we live in the digital world here and it happened over at Cabrillo so I imagine the 900 plus kids, half of them probably had cell phones and I think texted their parents, ‘Oh, we’re on lockdown.’,” said Lucia. “Not always what’s being passed on is accurate…all the information may not be able to be disclosed at the same time. We want to make sure that what we are passing along is accurate and giving families direction. If they needed to come to school early, we would have done that.”

In this situation, administrators at Cabrillo and Bowers were both contacted by the Santa Clara Police Department. A lockdown was put into place out of “an abundance of caution” and the district was notified.

According to Lucia, the district was in constant contact with Santa Clara police and once the all clear was given, the two worked together to determine what message would be released to parents.

Since everyone was safe, the message was run by the Superintendent before it was released via email through the district’s internal mass communications system. The system has the ability to call parents or text message parents in more dire situations. 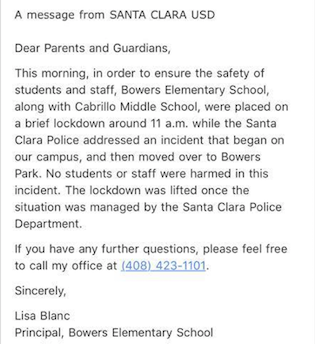 “Time-wise, we want to make sure that we give them accurate information as soon as we can move through our process of gathering the facts, getting it approved and then pushing it out to families in the best mode possible given the situation,” said Lucia.

Public Safety
Author Erika TownePosted on December 8, 2022
Sunnyvale Public Safety Officers have arrested Jesse Fausto Correa, 29 for the commission of a hate crime, along with robbery, battery and elderly abuse....