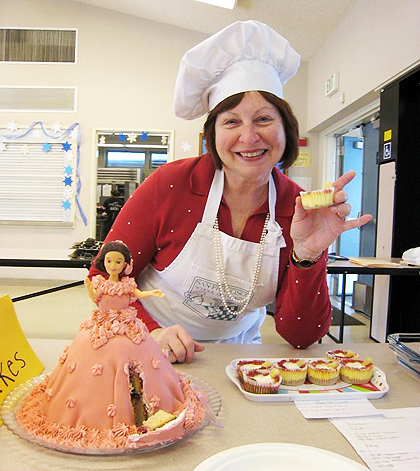 The judge popped a piece of cake into his mouth and then jotted down his tasting scores at Millikin Basics+ Elementary School’s annual Bake-Off Contest held in the school cafeteria on Jan. 10th. Not only did the baking contest allow participating students to use their math, writing, and art skills, it gave them an opportunity to be innovative.

“I started the Bake-Off Contest three years ago because I wanted [the students] to use their creativity,” says Dr. Melba Rhodes-Stanford, principal of Millikin Basics+ Elementary School.

The contest was open to Millikin students in the third, fourth and fifth grades. Within each grade level, there were five categories students could submit desserts for- cookies, cakes, pastries, pies, and breads. A judge evaluated a dessert for its presentation, texture, flavor, and recipe. Members of the Santa Clara Unified School District judging the desserts included Steve Stavis, Superintendent of Schools, Daniel Arias, chef instructor in the culinary arts and hospitality programs at Wilcox High School and Mission College, and Lisa Cesario, Assistant Superintendent of Educational Services. Cynthia Cheng, staff writer for The Santa Clara Weekly, was also a judge.

“I like the emphasis on keeping the treats healthy, with fresh fruit in so many of the treats,” Stavis says. His favorites included third-grader Roma Gandhi’s cranberry orange bread and fourth-grader Jaafer Saadat’s blackberry pie.

“I am so impressed with the creativity and quality of each dessert, from the presentation to the taste,” Cesario says. Her favorites included third-grader Kaitlyn Wang’s salty oatmeal cookies and fifth-grader Amelia Salinas’s coffee cake.

“What I look for are simple [ingredients] made perfect,” says Arias. The blackberry pie and coffee cake were also favorites with Arias.

Many students applied detailed decorations to their desserts. Fifth-grader Osama Salhab’s chocolate truffle expresso cake was frosted to resemble Toy Story’s Buzz Lightyear. Fifth-grader Ahmed Iftekhar’s cake appeared as a giant yellow caterpillar with jelly bean and butterfly accents. Fourth-grader Elisa Salazar’s beachfront buttermilk chocolate cake looked like a beach, with paper umbrellas and plastic palm trees planted all over the sand and ocean frosting. Third-grader Leena Salhab’s Palestinian cake came with a plastic doll head and arms while the rest of the cake was fashioned into a ball gown with pink fondant.

“My dad says walnuts are healthy so I added them to my recipe,” says Roma Gandhi, 8, of her cranberry orange bread.

“My mom taught me how to [handle] the crust so we wouldn’t break it,” says Jaafer Saadat, 9, of his blackberry pie.

“My mom found the recipe for me in a baking book,” says Kaitlyn Wang, 8, of her salty oatmeal cookies.

“My recipe came from my great-grandmother. When she passed away, my dad took her Herman, which is sourdough yeast,” says Amelia Salinas, 10, who made her coffee cake with the yeast.

“My mom and I tested different chocolate cake recipes. This recipe tasted the best,” says Ahmed Iftekhar, 10, of his caterpillar cake.