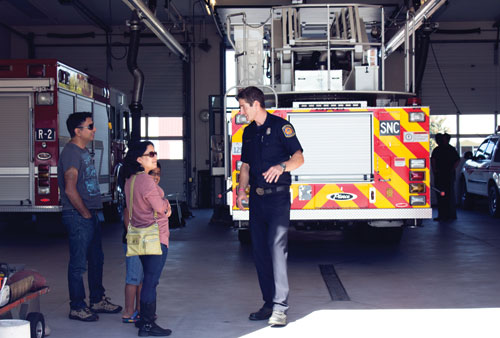 When a Chicago barn was set ablaze on Oct. 8, 1871, hundreds died and 3.3 square miles were burned to the ground over the course of two days. Fire prevention was unheard of. Now, each year, on the week of Oct. 9 (the day the most damage was done), Fire Prevention Week is observed. This one-week period commemorates the Great Chicago Fire and reminds people to check their home for fire hazards.

To kickoff Fire Prevention Week in Santa Clara, the Santa Clara Fire Department hosted an open house from 1-4 p.m. on Oct. 5. Not only were members of the public able to take a tour of the firehouse and talk to firefighters about their jobs, but it gave the department the opportunity to teach home fire prevention and emergency preparedness to the community.

“On Saturday we kicked off Fire Prevention Week with an open house,” said Fire Chief Bill Kelly. “The Fire Department hasn’t had an open house for about 20 years and many of the stations are new or have been remodeled…We wanted to give the community the opportunity to meet the firefighters and learn about fire prevention. We take emergency preparedness seriously in Santa Clara.”

This year’s theme is Prevent Kitchen Fires and a kit handed out by SCFD was full of information on how to stay fire safe. It also contained the following five safety tips: install and test smoke detectors; make a home fire escape plan; for cooking fires, put a lid on it; cool a burn with water, and in an earthquake, duck, cover and hold. Additionally, one of the handouts gave information on what should be included in an emergency supply kit.

“This week we’re starting our school visits,” said Kelly. “We will be bringing engines to 24 locals schools and the firefighters are going to talk about how to be safe in the home with an emphasis on kitchen safety, since most major fires are started in the kitchen.”

According to Kelly, approximately 800 people visited the fire stations. Because of the event’s success, the fire department plans to hold another open house next year. Check next year’s City calendar for the date and time.

Visit http://www.nfpa.org/safety-information/fire-prevention-week to see how Sparky the Fire Dog gets “cookin’ with fire safety.” The Santa Clara Fire Department operates 10 stations throughout the City of Santa Clara. The department maintains a three-and-a-half minute or less response time. Visit http://santaclaraca.gov/index.aspx?page=119 for more information.

Public Safety
Author Press ReleasePosted on May 8, 2022
Santa Clara County and the County’s Fire District are ramping up wildfire prevention efforts, just as the region heads into another fire season plagued...

Community Public Safety
Author Press ReleasePosted on May 7, 2022May 8, 2022
The Silicon Valley Leadership Group Foundation and the Santa Clara County Office of Education have teamed up to produce the 9th Annual Lam Research...
SPONSORED