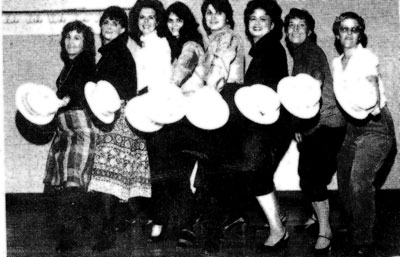 The journalistic record is mum about the first Santa Clara Showtime in 1982, the Dastardly Disaster, written by legendary Santa Clara community activist and journalist Cleo Stuckrath. However it must have been a roaring success because by 1983 Showtime was in full gear and everyone – community activists, politicians, dancing grandmothers, accordian players, you name it – was getting into the act.

That year’s melodrama was Penelope of Pruneyard Patch, which the Showtime troupe is reprising for 2012, the 30th anniversary of the popular Santa Clara fundraiser for senior health services.

“Showtime rehearsals are off and running,” wrote the prolific Cleo in the January 21, 1983 edition of the Santa Clara American. “Everyone is having the time of their lives…It is hard to say if the cast of Penelope of Pruneyard Patch is having the most fun or the enthusiastic participants of the Olio.*”

“Craig Sala was the handsomest hero ever with the mostest of everything including muscles,” wrote Cleo in the Feb 4, 1983 American. “His Tarzan yell brought down the house.”

“It was a wonderful evening,” the newspaper quoted Santa Clara resident Gloria Citti saying. “She was right about that,” wrote Cleo. “All the way from the pre-show party to the cast party which lasted until the wee hours of the morning it was a show to remember.”

Mary Hanel of the Heritage Pavilion of the Santa Clara City Library contributed to this story.

* &Olio” was the name given to a miscellaneous collection of performances in a burlesque or minstrel show. Showtime’s olio is the second half of the show, after the melodrama and intermission.