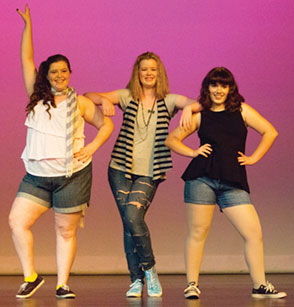 It’s been 45 years since the first performance at Roberta Jones Junior Theatre. To celebrate, the theater brought current and past performers to the Community Recreation Center stage for its annual “A Night Off Broadway” fundraiser on August 3.

“I want to say a big thank you to everyone who came out to support our theater group…especially since it’s our 45th birthday tonight,” said Roberta Jones Junior Theatre Director Kevin Cornelius.

The show kicked off with hosts Hannah Brady and Katie Ratermann performing a song about turning off cell phones and emergency exits. From there, Sofia Jakovcevic sang “N.Y.C.” from the musical Annie. Amy Thuesen danced to “Hey, Mister,” Norah Havlice sang “Reflection” from Mulan, and Sunny Aswani played “Jingle Bells,” “Old MacDonald,” “First Chords,” and “Happy Birthday” on his guitar.

After Aswani’s performance, Brady and Ratermann put together a comical routine called, “Two-Woman Musicals,” in which they acted out – rather quickly – key scenes from Grease, The Lion King, Hairspray, Cats and West Side Story. They then pared the scenes down and re-acted out the four musicals in about a minute – much to the delight of the audience.

Janhavi Kulkami played “Sonatina in G Minor” by Ludwig Von Beethoven and “Morning Prayer” on the piano, before Cornelius passed out roses to say thank you to many long-time supporters of the theater, including Judy Thomas who has been with the theater since performing in its first production – “Snow White and the Seven Dwarfs” in 1968. 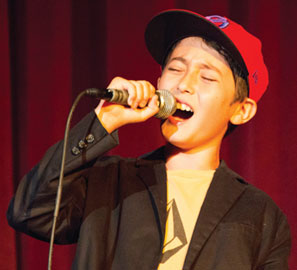 Haylee-Star Stevens danced to “I Want You Back” by The Jackson Five to close out the first half of the show.

At intermission, RJJT sold popcorn and drinks as part of its fundraising efforts and, “for one night only” guests were able to bring their snacks into the theater for the second half of the show.

“Act Two” opened with Annabel Gong and Pia Satana performing “Titanium” by David Guetta. Jenna Cady, Riley Evans and Anelisse Maciel danced to “LA chA TA” by fx, and Ratermann performed “Dreams.” Jason Cook played “Sonatina” by Beethoven. Then, Deepa Sridhar, who was praised for her performance as Marian Paroo in the RJJT production of “The Music Man,” performed “Love Never Dies.” Sridhar’s voice captivated the audience. But, Julia Cook, who performed next, equally stole the second half with her performance of “Memory” from Cats, in which she both sang and played the piano. The show ended with Sean Wainzinger performing “Radioactive” by Imagine Dragons.

“We are all about the Santa Clara community,” said Cornelius. “We welcome anyone [ages 8-18] to be part of our show…That’s what Roberta’s philosophy was all about.”

The Lyra Tones Play Concerts in the Park

Arts & Entertainment
Author Cynthia ChengPosted on December 11, 2020
On Dec. 5, Sunnyvale Community Players premiered its newest musical with a virtual streaming of “Once On This Island,” a show running until Dec....

Arts & Entertainment
Author Melissa McKenziePosted on September 27, 2017
There’s a big change at the Triton Museum of Art: Preston Metcalf is no longer head of the museum’s curatorial department. Earlier this month...

Arts & Entertainment
Author Cynthia ChengPosted on June 22, 2016
Mister Aladdin, sir/ What will your pleasure be?/Let me take your order/Jot it down/You ain’t never had a friend like me. These are lyrics...
SPONSORED