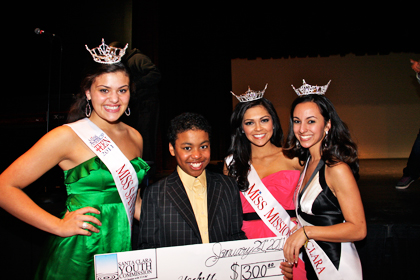 Martin Hackett, 13, won first place for his performance of “Let It Be.” With feeling and flair, Hackett sang The Beatles’ hit while playing the keyboard.

“I’m going to share my money with my family, especially with my sister [Joy]. My sister supported me through everything,” Hackett says of his $300 prize.

“Singing ‘Let It Be’ was my mom’s idea. Her birthday was a few days ago and this song was for her birthday,” Hackett continues.

Aisha Saeed, 8, won second place and $150 for her rendition of “Little Town” from Belle. Adorable and poised, Saeed was able to tell a story through song and dialogue. A student at Pomeroy Elementary School, Saeed will be performing in her school play next month.

“I sing every day. My favorite part of tonight is singing. I like to sing because it’s a nice feeling,” Saeed says.

“Because there are 25 people in Nameless, [maintaining] a steady attendance at practices was challenging. Team members from Santa Clara High School had to walk 15 minutes from their school to Wilcox High School for the practices [after school],” Pham says.

Something positive came as the result of students from two different high schools working together.

“Though I’m a student at Santa Clara High School, now I can go onto Wilcox High School and feel comfortable, like I’m accepted there. I’ve made friends at that school,” Hernandez says.

Also popular with the audience were the vocal performances of Tim Snider, 15, and Calvin Canchola, 19.

Currently a sophomore at Santa Clara High School, Snider charmed the audience with a song he wrote and dedicated to his friend, Abdala.

“I’ve written poetry since I was nine, started playing guitar at 12, and it took off from there,” says Snider.

“I was in a band and someone left their guitar at my place. So I started to play it and sing at the same time,” Canchola says.

Another crowd pleaser was Jose Pelino and Brandon Perez’s dreamy rendition of Frank Sinatra’s “Fly Me to the Moon,” which was comprised of a solo with guitar accompaniment.

“It’s a lot of fun being here and I get to build up friendships. I’m doing this again next year,” Perez says.