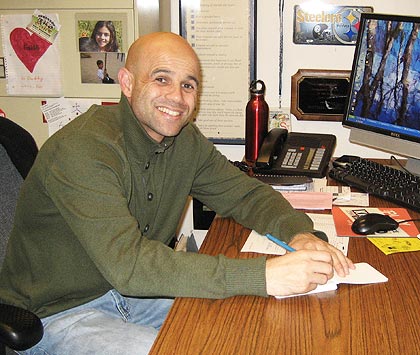 It’s not that Donnelle McGee’s poetry is about love per se. Rather, the Mission College writer, counselor (since 1998), and English instructor’s poems are always written from a mindset of love, and the act of writing heals his wounds.

There had to be
one ship
that
bucked
out
of
the
water
and reversed its course back to Africa.

“I never write when I’m angry; I approach a poem with love,” says McGee, who writes most of his poems in his head on his four-hour, four-day a week roundtrip commute—sometimes playing a favorite Pink Floyd or Jimi Hendrix CD for inspiration—from his home in Turlock to his job at Mission College, Santa Clara. He later molds and shapes his initial ideas.

“Poetry is a craft. I let it out, let it flow and take its own shape and form on the page and find its own voice. Whatever comes, comes. I never censor myself,” says McGee, describing his poetry as lyrical, narrative, free verse.

Family struggles, challenges growing up—McGee, who was born in Los Angeles and moved to Sacramento at 12, has had issues to conquer and started writing poetry when he was 17, partly out of depression. He was raised by his African-American mother and stepfather, not knowing that his white, Jewish biological father was still alive.

Then eight years ago he discovered his biological father, and they met for the first time. “It helped me to find my roots. All the truth came out. It was healing for all involved,” he says. His sense of found identity is reflected in “Homecoming,” his first full-length poetry collection, currently being considered for publication by several small presses.

“Even though my poems may dip into scariness and trauma, there is a burst of redemption,” says McGee, whose life and poetry are moving in new directions now.

“How do you choose a direction, a path, like poetry and not only turn towards it, but keep your heart open?  How do you stay open, no matter what?  Donnelle is that rare combination of a writer who is incredibly gifted with the particularities of language, but also compassionate,

profoundly centered upon principles of generosity, respect and kindness—a person on the edge of the page, but also his soul,” says author Bhanu Kapil, McGee’s advisor in the low-residency Master of Fine Arts Program in Creative Writing at Goddard College, where he got his degree in 2008.

A Mission College African American Literature class he took in 2000 motivated McGee to write poetry seriously and get the MFA degree. He had earlier earned a BA degree in sociology with a minor in journalism at California State University Stanislaus and an MA degree in counselor education at San Jose State University.

“I really do not think Donnelle started out to be a poet, he just is. I believe Donnelle wanted to write prose….but every time he would write a line, supposedly prose, he found a poem,” comments McGee’s Mission College colleague David Piper.

McGee incorporates poetry into the writing class he teaches. “Poetry helps students find their voice and how they can use imagery in their writing and make words come alive. I love it when students see what’s universal in a poem and say, ‘Wow! That’s my life!'” McGee says.

A Heart Where I Lay My Head
for Leslie

the one with violets in her lap
is eyeing me

a heart
where i
lay
my head

“There is no perfect poem, but even in imperfection, there is truth and healing,” says McGee. Read more of his poems at www.donnellemcgee.com.

Tech Museum Fun for Kids of All Ages