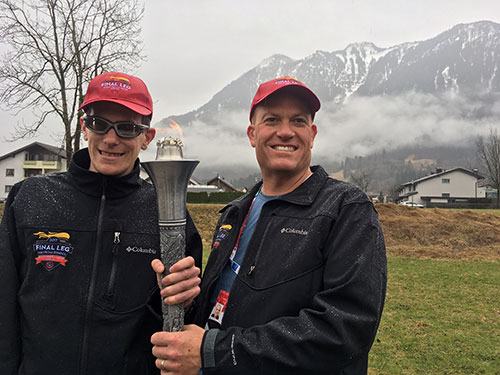 While watching ESPN this Sunday afternoon, be prepared to see a familiar face among the sea of athletes participating in the 2017 Special Olympics World Winter Games–Santa Clara Police Department Assistant Chief Dan Winter.

Winter, who currently serves as the State Director of the Law Enforcement Torch Run for Special Olympics and sitting on the Board of Directors for Special Olympics Northern California and Nevada, is one of 50 officers throughout the United States who were chosen to make the trek to Austria to take part in the Final Leg torch run team. As part of the journey, Winter and his team, which includes Special Olympian Francis Mauro of Gibraltar will participate in 49 ceremonies within 47 communities across the country between March 9 and 18.

“I have been with Special Olympics Gibraltar for the last nine years, and this has helped me develop my physical and intellectual abilities, and more importantly integrate into our society,” said Mauro, who had two palate operations and open heart surgery to help rectify health problems he had at birth. “I have also developed my communication skills to help other athletes to better themselves … most importantly I have made lots of friends and have met many people who treat us as equals.”

Athletes like Mauro are just one of the reasons Winter and other members of SCPD have supported Special Olympics throughout the years through various Tip-A-Cop evenings and other fundraising efforts, all of which result in the Northern California Law Enforcement Torch Run program raising over $1,000,000 each year for the organization.

“It has been absolutely fantastic to bring awareness to Special Olympics with my fellow law enforcement officers from around the world,” said Winter, adding that he is “deeply honored” to be chosen as a Guardian of the Flame representative. “I can’t wait to escort the Flame of Hope in a Santa Clara PD uniform on March 18.”

Another aspect of Winter’s torch running duties entails raising funds for Special Olympics. In doing so, he has committed to participating in an “icy polar plunge” into Flughafen Sea in Niederoblarn, Austria on March 19, where the weather is expected to reach high of 52 degrees with showers.

“I chose to do the plunge as a way to give back to the athletes and raise funds and awareness for Special Olympics,” Winter said, adding that he will continue to raise funds until the end of March. At press time, Winter had raised $2,800 of his $5,000 goal and his torch run team (Team 6) had raised over $330,000 (http://specialolympicsinc.donordrive.com/participant/DanWinter).

This year marks the first time ESPN will broadcast the Special Olympics opening and closing ceremonies in their entirety as well as airing a nightly program to showcase the athletes and daily competition. According to ESPN.com, opening ceremonies will air Sat., March 18 at 2 p.m. on ESPN affiliate ABC. Visit www.facebook.com/letr.org for information on the Final Leg Torch Run and follow http://twitter.com/DanWinterSCPD for updates.

Public Safety
Author Erika TownePosted on July 30, 2022
The Santa Clara Police Department (SCPD) issued a warning earlier this week after receiving reports of a phone scam that involved the department. The...
SPONSORED