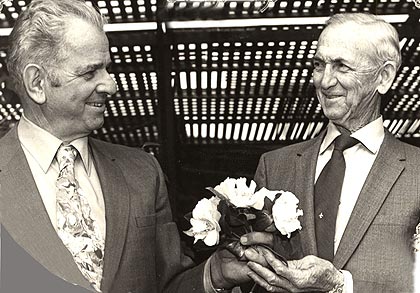 The upcoming Santa Clara County Camellia show at the Santa Clara Community Recreation Center (CRC) is the Camellia Society’s 70th. But could it be only the 69th? While officially 2011 is billed as the event’s 70th anniversary, a report in the March 15, 1947 San Jose Evening News implies otherwise:

But who really wants to quibble about something so lovely?

What is indisputable is that the City of Santa Clara has had a long love affair with the winter-blooming flower. Not only has the City been host to the Camellia Society’s annual county-wide show for over 30 years, between 1960 and 1990 the city was also home to two other annual camellia-centered events.

In 1965, former Mayor Matt Talia organized his first One Man Camellia Show at the Santa Clara Central Library. Talia was known for his award-winning camellia collection numbering in the thousands of varieties, and each show featured hundreds of blooms from his personal collection.

Talia also propagated several new camellia varieties – including the Miss Santa Clara and the Lady Ann, a white camellia named for his wife Ann Talia, herself an active member of the Santa Clara County Camellia Society.

In 1976, the Santa Clara City Council declared March 15 “Camellia Day in Santa Clara,” according to a 1976 city press release. The honor was in recognition of Talia’s “continued efforts in civic beatification through the promotion and propagation of the beautiful camellia,” and for bringing “favorable national recognition to the City of Santa Clara through the exhibit of blooms propagated and grown in Santa Clara.”

By 1980, the Santa Clara County Camellia Society show had become a fixture at its present location in the CRC. But the story could have had a different ending.

Santa Clara was also host to another camellia event from the mid-1970s through the 1980s, and its location may be surprising even to long-time City residents.

For at least 13 years, the Carmelite Convent held an annual Camellia Blooms Display, Arts, Crafts and Bake Sale on the convent’s grounds on Benton and Lincoln streets.

Beginning as a small floral display, the event evolved into a fair and bake sale, featuring handmade crafts made by the Carmelite sisters, according to a Feb. 9, 1989 Santa Clara American article.

Camellias were named by the 18th century Swedish botanist Linnaeus after Fr. Georg Joseph Kamel S.J., a 17th century Jesuit botanist. Despite the association, Kamel did not introduce camellias to the world. He did, however, introduce the plant from which strychnine was derived.

The Santa Clara County Camellia Society was founded in 1941, a mere six years after camellia lore credits E. Manchester Boddy of Los Angeles with touching off a California camellia craze.

Mary Hanel of the Santa Clara Central Library contributed to this story. Carolyn Schuk can be reached at cschuk@earthlink.net.

Teen Center: A Hip Place To Be