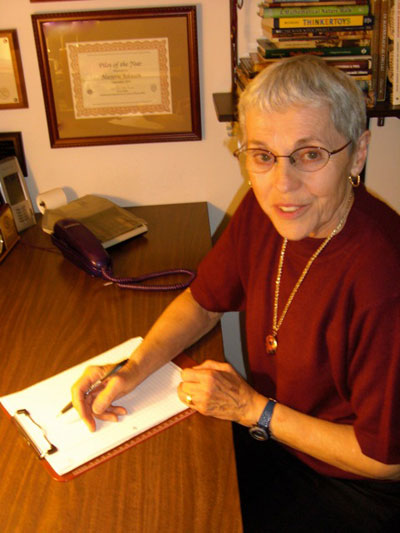 Are you looking for a good read for the cold winter months ahead? Marjorie Bicknell Johnson’s book Jaguar Princess is just the one.

Johnson took as much care researching this book about a Maya royalty, as she did teaching high school math in Santa Clara for almost thirty years. Ancient civilizations have always held her interest. She traveled to the Yucatan Peninsula (the setting for the story) the first time for her honeymoon with her husband Frank and returned in 2008 on their shared birthday to explore further.

We subscribed to ‘Archaeology Magazine’ and there was an ad for a guided archaeological tour, so that was the inspiration for our second trip, explains Bicknell Johnson. The couple became well versed in everything Maya, including the fact that the word Mayan only refers to the language itself, according to the author.

When the couple viewed the PBS television special, Cracking the Maya Code, which presented the detail that an eleven-year-old boy contributed to unlocking the Mayan hieroglyphs that comprise their written word, Marjorie Bicknell Johnson thought: A Maya girl could do that! And that was how Jaguar Princess came to be.

In 2010, Bicknell Johnson returned to the Yucatan once again. I had the book firmly in mind, so I went back to get more information, she says.

The Maya people in rural areas still follow the old ways. Pex (pronounced Pesh) is royalty and her grandmother raises her and wants Pex to stay in the rural area and become a shaman-healer, as she (the grandmother) is. The girl is awarded a scholarship when she shows she can read the ancient Mayan writing on their monuments. She wants to join the modern world. Pex goes to college and studies archaeology and works summers as an archaeology aide.

Pex finds an ancient Mayan book. Since they were all burned in 1562, it is a rare find.

She is the only one there who can read it, and she learns of a hidden treasure. Pex looks for the treasure and clashes with a looter. He leaves her to die in the dark in a cave. She kills him with the only thing that is free to move, her mouth, by uttering a curse. When he dies, she discovers powers she didn’t know she has, and has adventures like the Indiana Jones of the Yucatan, Marjorie Bicknell Johnson summarizes.

This book was written for anyone interested in archaeology and the Maya culture. Young people especially should find it appealing as the main character is a teenager, Bicknell Johnson asserts.

Because Frank Johnson and Marjorie Bicknell Johnson went together on these journeys, Frank Johnson was a very helpful editor of the book. To obtain your copy of Jaguar Princess,i go to www.buybooksontheweb.com or check on www.amazon.com, where it is soon to be released.