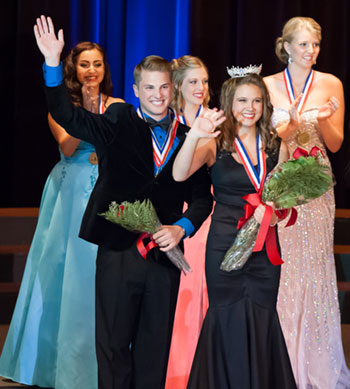 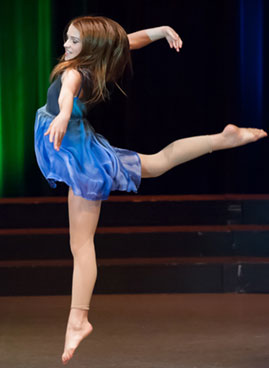 The evening show on July 26th at the Santa Clara Convention Center got off to a jazzy start. First, alumni of the California State Youth Accolades Scholarship Competition belted out “Seasons of Love” to begin the annual event. Because each contestant received a monetary prize, the show was really about the season for scholarships. Female and male contestants were separated into junior, teen, and youth categories. Judges evaluated them in various areas, including community service, communicative skills, and stage arts.

Adrika Yousuf, an eighth grader at Stratford School, competed as Junior Ambassadress of Santa Clara. She came away with a stage arts prize.

“I sang ‘Don’t Rain on My Parade’ from Funny Girl,” Yousuf says. “It’s a fun and upbeat song about how no one should tell you what to do.”

Kyle Nakashiki, a senior at Wilcox High School, competed as Ambassador of Santa Clara County. He won a stage arts prize for his upbeat vocal performance to “Great Defenders.”

During the communicative skills portion of the competition, Nakashiki spoke about the volunteer work he does entertaining local veterans.

“I’ve [heard] veterans say thank you, and it just brings smiles to my face,” says Nakashiki.

Melissa Bowling, a student at California State University, Monterey Bay, competed as Miss Santa Clara County. She hit all the right notes while singing “Somewhere Over the Rainbow.”

“The message I get from [the song] is that any dream is possible, and if you believe in yourself, you can fly over the rainbow too,” Bowling says.

Bowling, who is from Santa Clara, and David Ren, a harpist from San Jose, each won a special judges award for landing perfect scores in their stage art performances.

Madison Wackerman, Miss Orange County, took home $3,000 and the tiara for Miss California State. The incoming freshman at University of California, Berkeley sang, “It Don’t Mean a Thing” as her stage art.

“I look forward to helping the community,” Wackerman says. “I plan to [be active in] the campaign Spread the Word to End the Word. I plan to get rid of the word ‘retarded’ used in social settings.”

Horst Bauer, Manteca’s Young Man of Achievement, is the new California Ambassador and the recipient of $3,000. He sang, “Caro Mio Ben” as his stage art. Bauer is studying Political Science at San Francisco State University.

“It feels amazing to win,” Bauer says. “My platform is the ‘It Gets Better’ project. My goal is to fundraise for the [‘It Gets Better’] book to distribute to others.”

The new titleholders will make appearances and be spokespeople for Youth Focus Inc., the event sponsor.

Community
Author Cynthia ChengPosted on October 10, 2019
Outside the Sunnyvale Heritage Park Museum on Sept. 28 were children panning for gold during the museum’s 11th Anniversary Celebration. According to Laura Babcock, Director...

Community
Author Santa Clara WeeklyPosted on January 31, 2019
The following is a list of events happening in Santa Clara and throughout the Silicon Valley. Want to share an event to be featured?...

Arts & Entertainment Community
Author Santa Clara WeeklyPosted on April 25, 2019
Thank you to those who submitted photos for The Weekly’s Photos of the Week. For a chance to be featured, please submit your photo...
SPONSORED