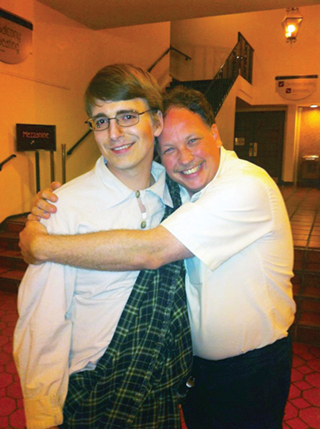 Bernard Smith is a typical 27-year-old. He loves music, is taking college classes, has an interest in computers and biology, and enjoys spending time with his family, which includes his two younger sisters, Sarah, 25, and Rachael, 20. However, where Smith strays from his peers is that, at two-and-a-half-years-old, he was diagnosed with autism.

“When we first started music, I was looking for ways to mainstream him in school,” said Smith’s mother, Donna Smith. “He was in a special day class and…music was where he could be with other kids. So that’s how it started.”

Due to his perfect pitch, Smith took up the trombone in fourth grade. Now, he’s in the South Bay Trombone Choir, a group that practices at the SES Hall on Lafayette Street; the Buchser Déjà Vu band, where he plays trombone and showcases his tenor voice; is one of the founders of the Magic Makers, a band for developmentally challenged students; plays in the jazz ensemble Synchronicity; sings at fairs with his friend, drummer Andrew Wilson; has sung the National Anthem at a San Jose Giants game; released a CD where he sings some of his favorite songs, and is part of the Lyric Theatre.

While his speaking lines are few and far between, Smith was given two vocal solos in the Lyric’s production of Brigadoon earlier this year, and can be seen in the theater’s upcoming production of Cyrano de Bergerac. 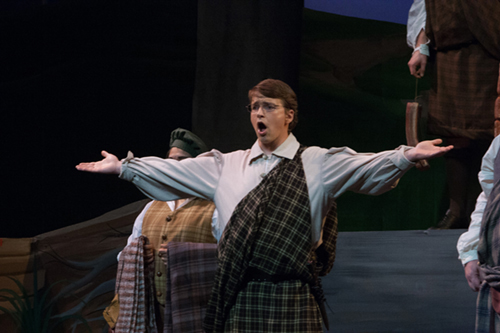 On stage, Smith is just like everyone else. There is no autism or stigma relating to the disorder holding him back. And, it’s on stage where he truly has the opportunity to shine.

“When we started with the Lyric Theatre over a year ago, they had him in Gondoliers,” said Donna Smith. “At first it was difficult for him because we were dealing with a whole set of skills that we had never worked on…He was learning how to take direction from people, how to deal with constant change because directors are constantly changing things…and remembering all these [intricate] dance moves…I’m watching this and I’m thinking, ‘look at you. I had no idea.’…He’s hanging out with people and he’s having conversations with people…This is a whole new level we’ve gotten to and we’ve gotten there through his involvement at Lyric Theatre. I can’t attribute it to anything else.”

Although Smith plans on auditioning for future roles with the Lyric, he’s most looking forward to being part of the Lyric Victorian Carolers this holiday season.

Until then, see Smith in Cyrano de Bergerac July 27-28 at Santa Clara University’s Recital Hall. Tickets are available at http://lyrictheatre.org/jl/season2012/cyrano2012.html. To see videos, visit his YouTube channel at www.youtube.com/user/dsabern.

Fans Can Make Their Mark at Levi's Stadium With Fan Bricks