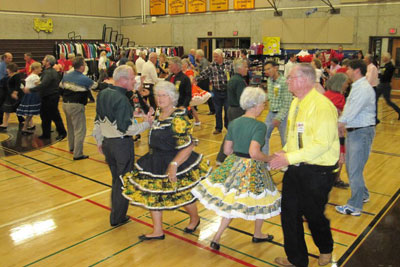 “I moved to Northern California from San Fernando Valley and I didn’t know anybody,” Jerry says. “My landlord asked me to come to a square dancing class held at a school auditorium. There, I met my first wife. She passed away 11 years ago.”

“I got involved with square dancing in the ‘80s when my parents encouraged me to get involved,” Debbie says. “I took classes with my first husband. The classes were in San Mateo. I got back into dancing when my children were teenagers. I joined a club in Pleasanton, and my children joined a youth club in Livermore. After I was divorced, I met Jerry at a hoedown, which is what we call our dances.”

Today Jerry and Debbie are co-presidents of the Santa Clara Valley Square Dancers Association (SCVSDA). These two Fremont residents meet with fellow dancers in San Jose on Sunday nights for Star Eights, one of nine clubs affiliated with the SCVSDA.

Jerry has met a square dancer as young as 4 years old and danced with fellow association members who are in their 80s. The opportunity to socialize, meet new people, and work out appeals to the many members of the SCVSDA.

“You meet friends that you’d stay friends with forever,” Jerry says. “Everybody’s likable and they become friends. There are aerobic movements in square dancing and you will sweat.”

“Square dancing is a fabulous form of entertainment,” Debbie says. “It gets you out of the house and away from the television at night. And you get to enjoy the friendship of others.”

“Square dancing is done in groups of eight,” he says. “There’s basic, mainstream, plus, advanced, and challenge dancing. These are the different levels. We have callers who stand up on the stage to call the moves. Names of moves include square thru and star thru- they [determine] the shape the dancers will make.”

“The association is comprised of a group of clubs in the area,” Jerry continues. “The state is divided into several areas. Our member clubs are in the Santa Clara County, Alameda County, Santa Cruz County, Monterey County, and San Benito County. We’re always seeking new members. There are singles clubs, couples clubs, and gay clubs within SCVSDA. Callers from all over the world call in English. We don’t discriminate against anyone.”

Jerry and Debbie encourage newcomers to give square dancing a try.

“If you know which wrist you wear your watch on, you’d be okay,” Jerry says. “It might take some people time to learn the moves but sometimes dancers with two left feet can square dance even better than the ballroom dancers.”

Those interested in taking square dance classes can do so at many locations in the Bay Area, including the Resurrection Lutheran Church in Santa Clara. For more information about Santa Clara Valley Square Dancers Association, such as details about classes, visit www.scvsda.org. Jerry and Debbie Janke are also happy to answer questions about square dancing opportunities in the local area and can be contacted at sqdncjanke@yahoo.com.