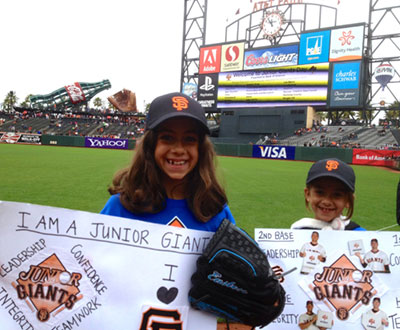 Rebekah Uyleman had never been part of a baseball team until her mother enrolled her in the Junior Giants, a summer baseball program sponsored by the San Francisco Giants Community Fund. As a Junior Giant, this fifth grade student from Don Callejon School had a blast practicing her baseball moves. On top of that, she and her coach, Preston Caldera, won the Willie Mac award. This honor is given to one player and coach in each of the Northern California, Nevada, and Oregon city teams.

Uyleman demonstrated confidence, integrity, leadership, and teamwork as a player.

“On the first day that the Junior Giants met for practice, someone got hurt and I took care of them and made sure they were okay,” Uyleman says. “I helped others along the way and showed people how to play. I encouraged people.”

On August 11th, Uyleman joined other winners and fellow Junior Giants baseball players in a recognition ceremony at the AT&T Park after a Giants game. Uyleman has fond memories of rubbing elbows with the former Giants player that her award was named after.

“It was cool standing right next to Willie McCovey,” she says. “There were a lot of kids who won the Willie Mac award who came, and I represented Santa Clara. I was walking on the field with my parents at a Giants game!”

Not only did Uyleman receive four free tickets to the game, she will attend a special luncheon with other Willie Mac winners.

“The main purpose of this program is to offer a free, non-competitive co-ed baseball program for underserved youth,” says Milee Beaulieu, a Junior Giants commissioner and acting sports supervisor for the city’s Parks and Recreation Department. “We’re happy to be part of this program.”