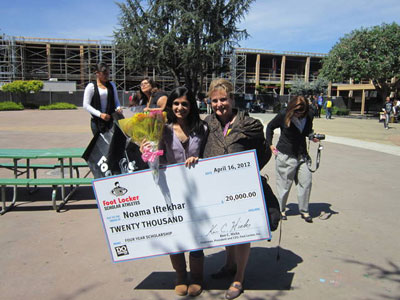 When Noama Iftekhar, a senior at Wilcox High School, was called into the principal’s office recently, she had no idea what the day had in store for her.

“The principal had called me into her office and said she was doing a quarterly check up on me to see how I was doing in my classes and how I was getting ready for college,” Iftekhar recalls. “Then she escorted me outside and I saw my parents standing there and I saw my club coach from the Sunnyvale Tennis Center. And then there were two representatives from Foot Locker who discussed the community service I’d done, my athletics, and my strength in academics.”

It was here that Iftekhar learned she had won $20,000 in scholarship money from a program run by DoSomething.org and Foot Locker Foundation.

“The entire school was there,” Iftekhar says of the surprise awards ceremony. “The entire student body knew about this but not me. I was really shocked. I heard about this scholarship because my career and guidance counselor, Ms. Jan Yee, recommended me and some other students to enter this. A total of 20 national grand prize winners won $20,000 each.”

“This is an athletic scholar community service award- it is not about muscle but about heart,” says Bonnie Billings, principal of Wilcox High School. “[Noama] is all about heart.”

An accomplished individual, Iftekhar is certainly very deserving of the award. Not only does she have a high GPA and numerous academic honors under her belt, she has been active in serving others in the community and abroad.

On top of volunteering at the library and at Stanford Hospital, Iftekhar once got together with the members of her varsity tennis team to host a 24-hour tennis marathon to raise money to support cancer research. The event generated over $1,000. The event was held in honor of a tennis mentor who was in remission from leukemia.

A four year member of the Santa Clara Youth Commission, Iftekhar has helped out at various city events, including the annual Easter egg hunt, Santa Clara’s Got Talent, and Tour de Santa Clara.

“My favorite part about being on the youth commission was the chance to meet new people and attend events to help our community,” Iftekhar says.

Last summer, Iftekhar traveled to Pakistan where she volunteered at the Shaukat Khanum Cancer Memorial and Research Center. There, she played with the children being treated for cancer.

“I helped the children exercise and kept their bodies active because the effects of chemotherapy are very strong on young bodies,” Iftekhar says.

Iftekhar and her family also collaborated to help start a school in Pakistan for underprivileged girls.

“My father and I noticed there were a lot of girls in Pakistan who didn’t have the resources to attend school so we started a local girls-only school,” Iftekhar says. “The school is in Behlol, a small village in central Pakistan. We talked to the local school board and local government there, and we raised funds through personal donations and local activists in Pakistan. [Our efforts] have been taking place since I was in the seventh grade. Forming this school was a family effort-my dad, mom, uncles, my little sister and brother, and I were all involved in this.”

In the fall, Iftekhar will be attending University of California at Berkeley, where she will be studying biomedical engineering. She dreams of being a doctor someday and hopes to participate in the Doctors Without Borders program.

“I’ll miss the memories of high school but I’m also looking forward to college with the different opportunities and the chance to expand my horizons,” Iftekhar says.

Schools
Author Melissa McKenziePosted on September 13, 2017
While most students are just starting to get into the swing of the school year, the Wilcox Stage Company is already thinking about its...