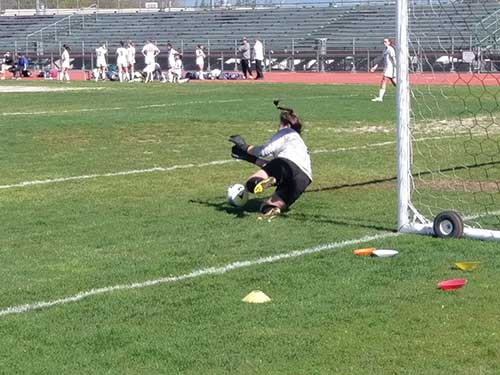 Without the services of senior striker and leading scorer Ellie Mujushi, the Santa Clara Bruins soccer team managed to survive through the first two rounds of CCS. A first-round, 1-0 win over Christopher was followed up with a thrilling 2-1 win over Sequoia on Saturday.

Playing without their star forward and still winning says a lot about this team. One could literally list off the entire Santa Clara roster when describing players who provided a big impact in the win over Sequoia. Junior Frida Ramirez and sophomore Nicole Nunes scored, while junior Hannah Mathews was a force up front. Senior centerback Haley Levene and senior goalkeeper Samantha Coelho each came up with solid performances, the latter of which made an amazing save late in the game to protect the one-goal lead. Not to mention, Juniors Zulley Lopez, Maddie Ambelang, Miranda Hunt and Ysela Baluyot each stood out with strong games. Out of all of them though, the clear stand out was their little energizer bunny in 4’11” sophomore Brooklyn DeGuzman.

“She fights out there, she may be small, but she’ll go after anyone,” commented Levene on DeGuzman. “She helps us a lot out there.”

“She’s small like me,” added Ramirez on DeGuzman. “It’s hard going against girls like twice our height, but she did really good today.”

DeGuzman has come off the bench all season playing effective minutes, but she definitely played some of her best soccer against Sequoia. She nearly scored on a bang-bang play where she collided with the Sequoia keeper and she also set up Ambelang for a glorious opportunity with a nice flat back pass. Despite her smaller stature, DeGuzman has an uncanny ability to use her head, both physically and with her intelligence.

“She was a huge spark,” noted Bruins Head Coach Brad Comstock. “Brooklyn is one of the quietest girls on this team, but probably one of the smartest on the field. Every time she amazes me. She could be in the middle of Ellie and Hannah (six-foot tall teammates), and still get the [bleepin] header. It’s like ‘how do you do that?’ She’s just that smart, she knows where the ball is gonna be. You can’t teach that.”

Santa Clara’s next game was this past Wednesday.

Painting for a Cause